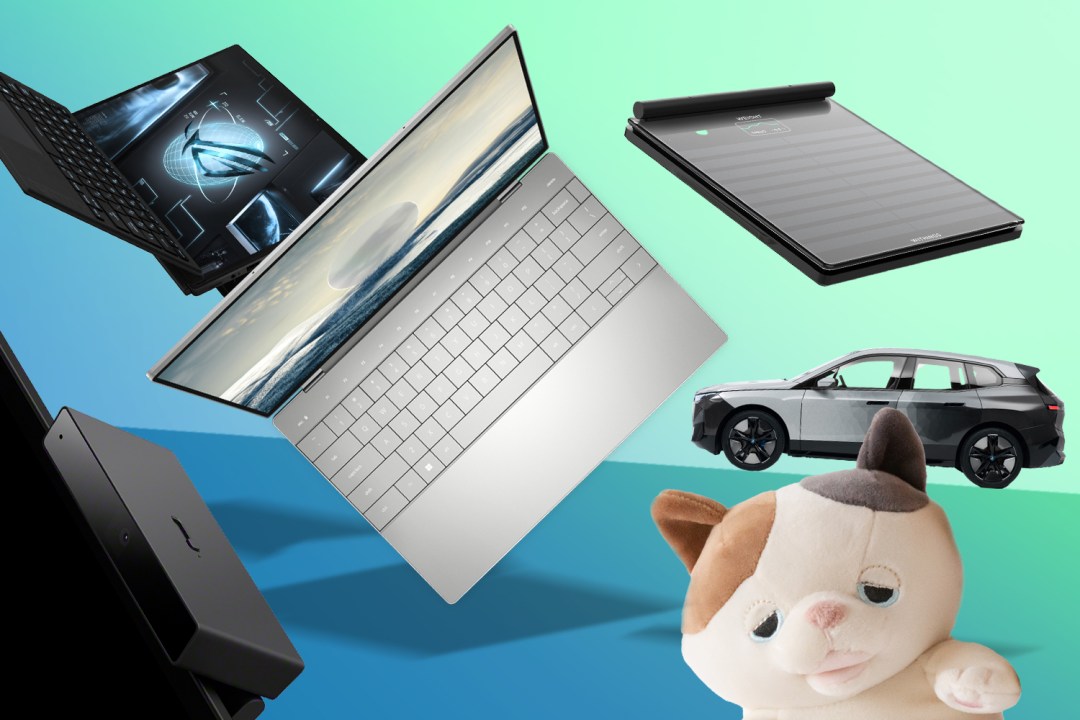 The current global situation threatened to derail CES 2022, with a raft of big names avoiding an in-person presence. But even no-shows couldn’t stop the world’s biggest gadget show from wowing us with the future of technology – whether we want that future to come to pass or not.

Perhaps the reality of living in a pandemic has made gadget creators crack because 2022 was a year in which things went decidedly weird. Here are the trends that most caught Stuff’s eye – some of which made smoke pour out of Stuff’s ears.

BMW mistook a car for a Kindle

Tinted windows? Pah. How about a tinted car, where the tint can be controlled by the driver? That’s BMW’s cunning plan, covering a motor in E ink.

You can turn it white on bright days to reflect the sun, or black when you want to pretend you’re starring in Knight Rider. Animated patterns can be used to hypnotise folks behind you into becoming part of your Mad Max-style convoy. Probably.

No word, mind, on how the system deals with dings and scratches, nor whether you can have your car’s exterior display the latest best-seller to entertain other road users when you’re all stuck in traffic.

There was no shortage of new TVs, many of which are getting to the point where you’ll soon have trouble fitting them into the average home, should the embiggening trend continue. But this year, accessories did interesting things too.

The Bravia Cam urges younglings to move away if they get too close to the screen, and dims the display if everyone naffs off in a huff when the wrong person’s ejected from Bake Off. You can also use gestures to change channels, which Stuff is convinced totally won’t lead to comical hand-waving battles between family members.

Elsewhere, kudos to Samsung for thinking different, with its Eco Remote that charges by devouring Wi-Fi signals. Makes a nice change from folks arguing said signals will scramble your brains.

Not literally – but almost. Dell’s XPS 13 Plus provides the kind of minimalism even ex-Apple design guru Jony Ive might think a bit much. Function keys have been replaced by a haptic not-a-Touch-Bar-honest-guv, while the trackpad lurks below the keyboard… somewhere. The XPS 13 Plus isn’t telling. Presumably, Dell will next year remove all the keys.

Mind you, Dell wouldn’t be the first to do that, given that bendy tablets continue their relentless onwards march. The Asus Zenbook 17 Fold was the standout this year, with a 17.3in display that in clamshell mode lets you tap away on a virtual keyboard, should your Bluetooth one get hurled into a hedge.

Tech will make you paranoid about health

Home tech is getting increasingly smart at providing insight into your wellbeing, but it feels like things might have gone a little too far. At CES 2022, Withings unveiled Body Scan. What looks like a set of smart scales is in fact packed with sensors. Want to feel bad about yourself? Have at it, with read-outs that’ll analyse everything from your weight to specific body parts.

Still, at least you choose to stand on the thing. By contrast, Sengled’s Smart Health Monitoring Light (as in, light bulb) attempts to read vital signs as you mooch about your home. It’s still in development, so plus points if the fall detection feature works; minus a billion if the bulb flashes on and off wildly should you have the audacity to sit in front of your telly with a particularly unhealthy snack.

Gaming wants to be everywhere

We’re not talking about the metaverse, although that was everywhere at CES 2022. Instead, companies seem determined that full-fat high-end gaming will increasingly be threaded throughout your life.

At the conventional end of the spectrum, Razer announced powerful gaming laptops and Samsung unveiled a 55in curved gaming monitor that made thousands of wallets shudder. Asus, with its Flow Z13, decided AAA gaming and tablets could in fact work together.

Then there’s Razer’s Project Sophia – a concept unit where the desk is the gaming PC (or the gaming PC is the desk) – and Alienware’s Concept Nyx, which reasons games should follow you around your home, showing up on whatever screen happens to be nearest.

Back in the 1970s, sci-fi was awash with metal chums that stomped about the place and did our bidding. (Well, they did when not busy eradicating humanity on a whim.) But at CES 2022, we got the distinct impression they’re not all quite as helpful as we’d once dreamed.

Bzigo was unveiled as a means to locate mosquitos in your home with a laser, but you still have to go to the trouble of catching the things. And then, to one-up CES 2020’s freaky Petit Qoobo, Amagami Ham Ham is a robot designed for people who like the feeling of getting their fingertips bitten. You’ll forgive Stuff for now backing away slowly.