Home / Features / Dyson’s greatest inventions, from the Ballbarrow to the Airblade

James Dyson has been plucking innovative products out of his head for the best part of 50 years now. And we’re not just talking bagless vacuum cleaners. His company had humble beginnings, but would go on to heavily influence its future ideas. Today, the firm isn’t just trying to keep your carpets clean: it wants to help you tame your mane and breathe easier too.

Join us as we take a stroll through nearly five decades of Dyson’s greatest inventions.

While still a student at the Royal College of Art, James Dyson spent part of his time working for British manufacturing company Rotork. Aged just 23 he designed the Sea Truck, a fibreglass boat able to carry a load of up to three tons. It was used by the military as a landing craft, as well as by the oil and construction industries.

After seeing a wheelbarrow get stuck in muddy ground, Dyson was inspired to create this: with its wide plastic ball wheel and plastic hopper, the Ballbarrow was far stabler and lighter than a traditional wheelbarrow – a boon on uneven or wet ground. Something of a design classic – and the ball would play a (quite literally) pivotal role in many of his later designs.

The design was also manufactured under license by Japanese company Apex and sold as the “G-Force”. It was a success in the Far East, and the revenue enabled Dyson to set up his own company.

A decade after the Cyclon came the DA001 (quickly renamed the DC01), the first vacuum cleaner sold under the Dyson name and, to put it mildly, a real game-changer (despite being a very similar design to the Cyclon). Dyson’s patented Dual Cyclone technology gave the DC01 huge suction power compared to its rivals (90 airwatts, to be precise) and dispensed with the bag for the first time – although this brilliant tech came at a premium price. Given the money James Dyson had invested, and the 5,127 prototypes he created before finalising the design, the price was justified.

Dyson’s first cylinder cleaner, the DC02 had a shape that allowed it to sit easily on stairs. It featured the same Dual Cyclone motor as the DC01.

The CR01 was another groundbreaking product: the first washing machine to feature two counter-rotating drums. This setup meant it replicated the action of hand-washing clothes, keeping the laundry constantly manipulated and flexed and allowing detergent to penetrate the fabric more effectively. Despite this, Dyson’s washing machine business proved unprofitable and a few years later, the company stopped building them.

The first of Dyson’s vacuum cleaners to come with Root Cyclone technology, which improved the Dual Cyclone engine by adding more cyclone chambers. This gave it 280 airwatts of suction power. The DC07 was the first model to be sold in the US.

The DC06 wasn’t a success, but Dyson tried again with robot vacuum cleaners, introducing the 2016 Dyson 360 Eye and its 2020 follow up the Dyson 360 Heurist (no, we’re not that keen on the name either). The latter two used cameras and sensors to map your home, and proved far more popular with customers.

Dyson revisited his 30-year-old Ballbarrow design for the DC15, an upright that replaced the front wheels with a single large, wide ball. This allowed the vacuum to be steered around your floor with far less effort and has become a standard feature on both upright and cylindrical Dyson cleaners since.

The company’s first battery-powered, handheld model, the DC16 weighed just 1.5kg and delivered 36 airwatts of suction from its dinky Root Cyclone engine. Variants designed for pet hair and in-car use were also released.

Intended to scape water off your hands with a jet of air, rather than slowly evaporating it, the Airblade went through several iterations over the years. In 2013, Dyson squeezed Airblade tech into a water tap, allowing people to wash and then dry their hands at the basin.

A bladeless fan that moves 27 litres of air per second without the possibility of chopping off your fingers. How? By forcing air through a fine circular aperture, causing its velocity to increase and to drag the air at the centre of the circle with it. The principal behind the Air Multiplier has been revisited many times since in Dyson’s fans.

This version of Dyson’s now-familiar stick handheld designed for cleaning hard floors. It works in a similar way to the DC16, but a long attachment adds replaceable wet wipes which shine your tiles or floorboards while the Cyclone engine sucks up dirt.

The Cinetic didn’t just dispense with the bag – it killed the filter too. Why? Because they’re a right pain to clean, and prone to clogging (and thus reducing suction), says Dyson.

Fine, flexible tips on the ends of the Cinetic’s cyclone chambers oscillated during vacuuming, which prevented dust from sticking to them and ensured they remained clear and unblocked at all times. So, in that ‘never loses suction’ claim, never theoretically really does mean never. Clever stuff.

Dyson’s first hair dryer came out of left field, but was more than just a blast of hot air. Combining the miniature motors seen in its vacuums with the bladeless design of its fans, the Supersonic promised frizz-free hair in a device much lighter than the models you’d find down the salon. A temperature sensor keeps your hair from getting damaged, and doesn’t leave you hot and sweaty after a blowdry.

By the time the V10 arrived Dyson had been making cordless vacuums for several years. This one, though, was powerful enough on battery power that the company decided to give up developing new corded models altogether. It brought a bigger bin, three suction speeds, and enough battery life to cover the ‘typical’ family home in one go. It quickly became the model people would replace their mains-powered vacuum with.

Is the Zone Dyson’s most oddball invention to date? Maybe, but this wearable air purifier/headphones combo promises to clean up the air you’re breathing. In smog-heavy cities it should help cut down on the car fumes that make it into your lungs, and in the country can help keep pollen at bay. And based on a short demo session, it can pump out some great sounding tunes too.

Though it has yet to launch at the time of writing, and we can’t see it becoming an icon like the bagless vac, there was no way we couldn’t include it in this list. 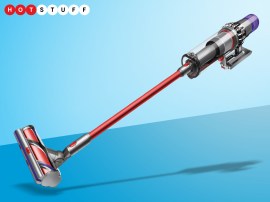 The new Dyson vacuums wobble, but they don’t fall down 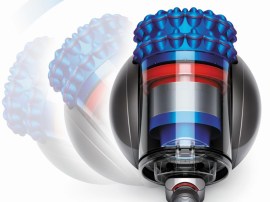 100 Best Gadgets Ever: Rise Of The WWW 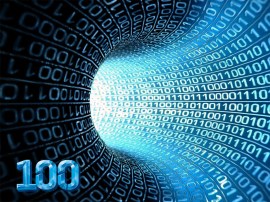