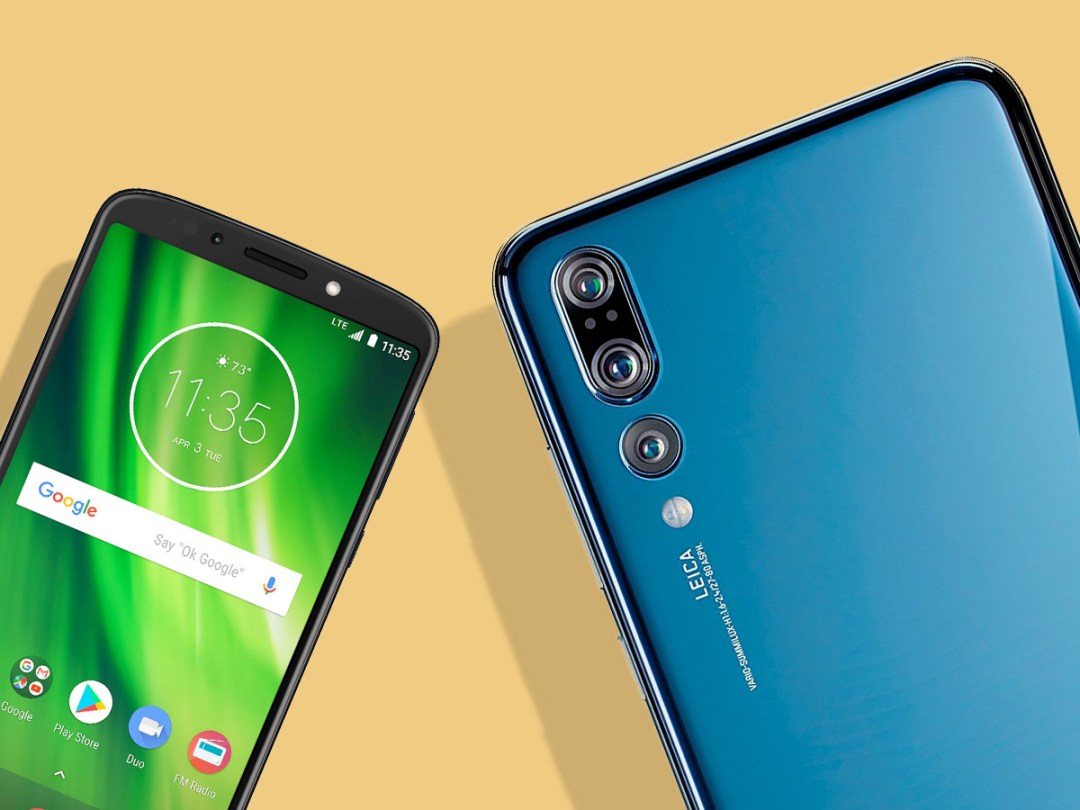 So you’ve decided to jump ship? To stop being an Apple drone and start being one of those people who calls iPhone fans Apple drones?

The situation today isn’t what it was in 2010. iPhones are great. Androids are great. Let’s leave the mobile platform tribalism in the past and get to the realities of smartphone life on the other side.

There’s good news. Switching platforms is easy these days. As long as your life isn’t so rooted in Apple gadgets they’ll gang up on your new phone and smash it to pieces, that is.

Let’s look at some of the practicalities of moving over, and some of the delights you can now enjoy in Android land.

What phone should I buy?

If you’re really at the start of this journey, we have a few tips on finding the right Android phone.

If your budget is tight, look at Motorola Moto and Honor models. You can’t really beat them. The Honor 9 Lite and Moto G6 Play are where we’d start. Both companies offer cheaper phones, but any lower than these and you’ll start to see performance issues you probably won’t appreciate as an ex iPhone associate.

Stepping up to the mid-range sector, Honor is another top name, as is old favourite Nokia. The Honor 10 is fantastic value, as is the Honor Play. It may not be a “cool” name, but that’s why we get such a good deal on its phones. The Nokia 7 Plus is a very solid mid-range option too. If you can spend a bit more, the OnePlus 6 is unmissable. It costs £469 but performs at the same level as top-end Androids. And iPhones.

If only big money mobiles will do, you can’t really go wrong. Sony, HTC, LG, Samsung and Huawei all offer great choices. And without loads of experience of Androids, you’ll probably like the lot.

However, we recommend Samsung’s S9 family of phones, available in smaller and larger “Plus” varieties, and the Huawei P20 Pro. It takes the best handheld low-light photos around. If you want to experience the purest version of Google, check out the Pixel range.

How do I transfer all my contacts?

Remember the days of having to write down all your contacts on paper when you changed phones? No? Good for you, you’re still young.

Moving contacts from an iPhone to an Android isn’t as laborious as this, but also is not quite as foolproof as doing so Android-to-Android. In that case, you just login to your Google account. That’s it. You may have already done the work needed, though.

Already use a Gmail address on your iPhone? If you selected to sync contacts when you set that up, you’re all good. Not sure if you did? As long as you still have your old iPhone, it only takes a few seconds to check.

Go to Settings, then Accounts > Gmail. You should see a Contacts slider in this page. Make sure it’s engaged, then your contacts will fly over to that Google account when it next syncs. Just make sure that account is also put into your new Android phone and your contacts should all appear. No notepad needed.

What about my other Apple products?

Here’s the biggie. What works on iPhone that suddenly won’t work on Android? The key items are all Apple products.

If you have a HomePod and an Apple Watch, you’re in trouble. Neither is designed to work with Android. That said, why are you leaving Apple when you’ve invested your life savings in the place?

Don’t worry about iCloud too much as Google offers comparable services. And you can even access your iCloud photos on a Windows laptop. Virtually everything else will work with an Android just fine.

Use an AirPlay wireless speaker? Unless it’s a very old one, you’ll probably find it supports Spotify Connect or platform-agnostic DLNA anyway. Bluetooth accessories don’t care about the platform you use either. When you’ve been in the iPhone bubble too long, it’s easy to forget there are actually way more Androids out there than iPhones.

What about all the apps I purchased on my iPhone?

The sticky bit of changing platforms is that you lose all the apps you bought on iTunes, and any progress made in games too. There’s a potential fix for that latter one, though.

Lots of games use a login or social network link to keep your progress in check across devices. Gameloft’s Asphalt 8 is a good example of this. Who wants to lose their whole racing career just because they fancied a Huawei P20 Pro rather than a new iPhone?

You will need to buy some games and apps, mind. And for that you might want to consider a place that sells Google Play vouchers will some money off.

Zeek and Cdkeys are two spots online that lop off some of the cost of Play Store credit. It’s not much of a saving, but it is better than nothing at all. A switch of platforms is also a good excuse to wrench yourself away from a free-to-play app that you’ve wasted hundreds of hours playing. It’s time to move on, even if you did end up spending £50 in magical gems on the thing.

What will I do with my gazillion treasured photos?

What do you do with all those iPhone photos? If you enabled iCloud back-ups, those photos are stored online anyway.

However, you may also want to pull off all your snaps over the years manually. It’s easiest to do this with iTunes. Plug your phone into your computer, just like the old days, then select the device icon to get to your iPhone’s iTunes page.

Choose Photos in the left-side menu, check the Sync Photos box and the “All photos and albums” radio button. This will pull all the images to your computer’s drive. Just make sure there’s enough storage free for the job.

When you’re setup with your new Android, we recommend leaving that old iPhone library in the past and switching over to Google Photos.

When you first run the app, which is preinstalled on all Androids, you’ll be asked whether you want to sync your photos to the cloud. Give this the OK and all your shots will be stored online, for free, and linked to your Google account.

Google does chop down the quality a little, but the service is free. And if you want your photos kept in their original glory, you can do that too, but your storage is limited to 15GB without paying a subscription.

Any other cool stuff I can do with photos?

You can now just put files on, and drag them off, your phone Serious mobile photographers, yep that’s a thing these days, will also love the way Androids operate.

When you plug one into a Windows PC or Mac, you can drag and drop photos from the file system. No more faffing about with “sync’ing” or emailing photos to yourself is required.

When you plug your phone into a Windows laptop, just make sure the USB setting is “File Transfer”. A USB item should appear in the notification drop-down to let you change this.

Open up the file system in Windows Explorer, go to the DCIM folder and then Camera and you should see all your photos listed.

It’s the easiest, quickest way to snag a holiday’s worth of photos without any uploading.

The process on a Mac is nearly the same, but you’ll need the Android File Transfer app, available online for free.

What about Apple Pay?

If you’ve switched to using your iPhone as a bank card, a feat that seemed like tech wizardry just a few years ago, you don’t have to switch back to a debit card when you buy an Android.

Google has its own version, Google Pay. It works in much the same way. NFC lets you swipe away just as you would with a contactless card. You just need to make sure your bank card is supported. And, by now, it probably is.

There’s a full list of supported cards and banks on the Pay website. If you buy a recent Samsung, you can also try out Samsung Pay.

This is similar, but also uses an extra piece of tech called magnetic secure transmission, which emulates a magnetic strip on the back of a card. But this is more of an advantage in the US than the UK, where we love a bit of contactless.

Can I customise my new Android phone?

Two of the best reasons to switch to Android are you can buy a phone much cheaper, and Android gives you a load more flexibility. How much the phone itself makes this clear depends on the model. A Google Pixel 2 XL seems quite stiff, almost as “fixed” as an iPhone. Samsung’s Galaxy S9 lets you completely alter the look of the phone with themes. A Huawei P20 goes further, letting you switch the apps menu on an off. Without the app drawer, the interface is closer to an iPhone’s. However, all these phones can use “Launcher” apps. These paste a new face over your phone, totally changing how the software feels. Some are radically different to standard Android. Ones to try include BlackBerry Launcher, Microsoft Launcher, Nova, Apex and Google Now. That last pick doesn’t seem to be compatible with the latest versions of Android, though, suggesting Google is in the process of phasing it out.

What’s the deal with widgets?

Widgets are still a thing?

We’ll level with you. We don’t use one of the main features that separates Androids from iPhones. Widgets? Nah, we can take or leave them.

However, you might fall in love with these little (and sometimes not so little) things if, for example, you live your life through a calendar. For the iPhone die-hards, these are like micro apps you put on your homescreen.

The most popular types are weather reports, calendar display, custom clock faces and toggles for features like Wi-Fi and the screen brightness level. A clock in particular is yet another way to give your Android a distinct look.

For a good starting point, check out HD Widgets. It has been around almost as long as Android itself.

To add a widget, long press an empty area on a homesceen until a menu pops up. You should see a widget button there. Some phones make you perform a pinch gesture to get to the same place instead.