It can be difficult to set a new pair of true wireless earbuds apart from any of the thousands of others that are out there right now, but Philips might just have managed it with its A7507 hybrid buds.

As well as large, low-distortion, graphene-coated drivers and active noise-cancelling, the sport-friendly earphones have bone-conduction microphones for better quality calls when there’s a load of racket in the background. A dedicated algorithm also works to reduce wind noise, while support for LDAC and AAC codecs should mean your tunes sound as sweet as possible.

The battery in the buds lasts about eight hours, with 21 more in the charging case, but if you’re running really low and just need a bit of juice to get you home, 15 minutes plugged in via USB-C is enough to add an extra hour.

If you’re after a speaker rather than a pair of earphones, Philips has also unveiled two Bluetooth jobs: the 10-watt S4807 and larger 40-watt S7807. Both have built-in straps and a double layer of rubber to protect from the bumps and scrapes of life on the road, come with Bluetooth 5.2 which means they can be connected to multiple devices at once, and can be paired with second speakers for proper stereo sound.

Philips hasn’t announced pricing for any of the new products yet but they should be on sale later in the year.

Everything you need to know about Philips’ new TVs and earphones

Looking for a new telly or pair of earphones? Philips has got you covered 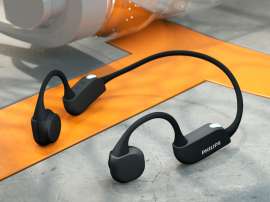