Acer has refreshed its super-portable Predator Triton 300 gaming notebook with a new 11th Gen Intel Core H-series processor and NVIDIA GeForce RTX 30 Series Laptop GPUs to create what it describes as a “beast” of a machine that’s still incredibly compact. Despite measuring in at just 19.9 mm, the Predator Triton 300 is chasing “desktop-caliber gameplay” and boasts a 4.6GHz clock speed, a choice between 360 Hz FHD or 165 Hz QHD displays, up to 32GB of DDR4 memory, and the latest 5th Gen AeroBlade 3D fan that uses custom-engineered metal blades to generate 55 percent more airflow than a plastic fan. DTS X:Ultra audio will treat your earholes to 360-degrees style surround sound, and users will also get plenty of low-latency connectivity options including ‘Intel Killer’ E2600G Ethernet and Wi-Fi 6 AX1650i. Naturally, all of that tech will cost a pretty penny, so expect to fork over at least $1699 when the Predator Triton 300 eventually launches this summer.

Enough gaming grunt to take on an entire Spartan army 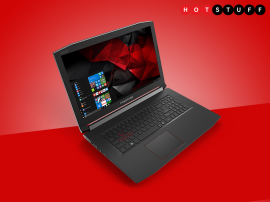 Super skinny shape, with room inside for serious power 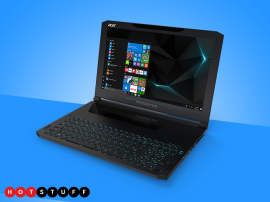