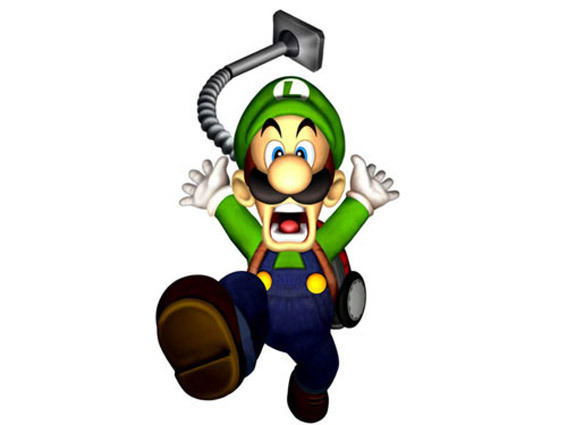 Videogames can be a lonely pursuit, but having the likes of this little lot around makes them less so, whether they’re pulling your “ass” out of the fire, telling you where to go to avoid a Covenant ambush or retrieving the ducks you’ve just blown to kingdom come with a lighter.

Miles “Tails” Prower first accompanied Sonic on his second ever Mega Drive outing, either controllable by a second player or simply under the guidance of the game’s AI. The young fox’s twin tails allow him to fly helicopter style, carrying Sonic out of danger, and while he’s hardly the most nuanced or interesting of characters, his long-time association with Sonic puts him above the likes of Knuckles.

Almost always in his more famous brother’s shadow, Luigi is one of the gaming world’s great nearly men – usually available only to player two as an alternative version of Mario. However, there are times when he comes to the fore – such as the Luigi’s Mansion titles – and steps up to rescue his sibling, making him an increasingly interesting character in his own right.

Nintendo bad guy Donkey Kong didn’t get a real sidekick until 1994 (Donkey Kong Jr. doesn’t count…), when he became the good guy and the star of Donkey Kong Country, the British-developed Super Nintendo platformer. A monkey rather than an ape, Diddy Kong is faster and more agile than his friend; in single player, you could switch between the two at will, taking advantage of their respective skills, while in multiplayer you could guide both through a level simultaneously.

The AI whose smooth feminine tones are constantly keeping Master Chief up to date throughout the Halo series, Cortana doesn’t have a physical body, instead appearing sporadically as a hologram – by chance, a sexy-looking woman hologram. Hmm. While AIs can lack character, Cortana has a dry sense of humour and towards the end of the first Halo trilogy tells the Chief that she’ll miss him, suggesting her attachment to humanity’s best warrior is more than mere programming.

The Weighted Companion Cube is an integral part of the testing process at Aperture Science, often being necessary to the completion of a level. Yes, it’s an inanimate object, but if you didn’t feel some measure of guilt as you tossed it into the incinerator, we suspect your heart is cold, glassy and dry.

Voiced by, and with a personality very much reminiscent of, Stephen Merchant, Wheatley is another AI. He wakes the player from stasis so that both can escape the destabilising remains of Aperture Science, frequently helping out with the game’s puzzles until… well, until a certain point is reached, and it would be remiss of us to spoil that for anyone yet to experience Portal 2’s greatness.

A frequent computer-controlled companion during SAS missions in the Modern Warfare series, Captain Price actually first appeared in the World War II-set Call of Duty 2, where he led the player’s unit throughout the British campaigns. While his voice changed in the Modern Warfare games (Infinity Ward has hinted that the second Price is the grandson of the original) his distinctive facial hair and never-say-die attitude did not, and he appears in some of the series’ most memorable set pieces.

Ah, Alyx – the one person on Combine-ruled, dystopian Earth who seems attracted to mute bespectacled physics nerd Gordon Freeman – and God bless her for that. Alyx pulls Gordon’s behind out of the fire multiple times in Half-Life 2 and its expansions, but perhaps her greatest achievement is adding a human face (a very pretty one, it has to be said) to the series. We look forward to blasting headcrabs with her once more when Valve finally gets around to releasing the near-mythical Half-Life 3.

More of a backkick than a sidekick, Clank rides piggyback on Ratchet for most of Ratchet & Clank, a burden apparently accepted on the strength of the robot’s aptitude for getting the protagonist out of tight spots, usually by turning himself into some sort of back-mounted jetpack. Much less worrisome than having a monkey on your back.

You can have many, many different followers in Skyrim, and Lydia is far from the most interesting. And yet, and yet… none of the others have captured the gaming world’s collective imagination as much as this stern-faced shieldmaiden, probably because she’s the first companion most players receive in the game. No matter that her vocabulary consists of about eight phrases – for many Dragonborn, Lydia’s reliability is so loveable that they feel compelled to “put a ring on it” and marry her.

Yoshi was intended as a buddy for Mario even during the development of the first Super Mario Bros., but it wasn’t until the arrival of the SNES that Shigeru Miyamoto had the processing power to make his vision a reality. When ridden by Mario, this green dinosaur could devour enemies or suck up Koopa shells to be spat back out as weapons. After Super Mario World, Yoshi became a Nintendo regular, being a playable driver in Super Mario Kart and a fighter in Super Smash Bros.

Like all best friends, Duck Hunt’s dog could be a right pain in the proverbial at times, chuckling meanly when you failed to bag any birds. But he’d also flush out the ducks and retrieve their lifeless corpses for you, which was heart-warming.

Hal Emmerich aka “Otacon” first appeared in the PlayStation version of Metal Gear Solid, where he helped Solid Snake defeat the Metal Gear REX machine that he himself designed. A huge nerd (his nickname comes from an anime obsession), his codec updates help keep Snake alive, not to mention provide some comic relief in a game series that can be a touch heavy at times. He also appears in Metal Gear Solid 2 and 4.

In a trilogy where you have no shortage of companions, Garrus stands out as Shepard’s best bro – or in the case of female Shepards, possibly something more romantic. The cynical, hard-nosed turian sticks by your side through almost the entire series, gaining some nasty scars and an obsession with calibrating weaponry along the way – and Mass Effect 3’s scene in which Shepard and Garrus engage in a friendly contest before heading off to almost certain doom is one of the game’s most enjoyable moments.

If proof were needed that dogs will be man’s post-apocalyptic best friend, Fallout is the hypothetical evidence. So faithful a companion is Dogmeat, you can find him in all the Fallout games. To scavenge and protect.

Legendary member of the Star Fox team and mentor to Fox McCloud himself, Peppy Hare is most famed for his Star Fox 64 line, “Do a barrel roll.” Inevitably, it’s become an internet meme – just try typing it into Google.

Based on the Steve Purcell comic, crime busting duo Sam and Max brought their contrasting characters to video game land in 1993. While Sam was the main playable character, Max came with his own useable inventory which came in handy (in tune with his character) when a bit of violence was required.

A pioneer of multiple controllable character gameplay, Head Over Heels had two characters (Head and Heels) with different skills that had to be combined to progress through the game. Head, for instance, could fire doughnuts to paralyse enemies, a strategy that never took off in the real world.

Murray the demonic talking skull (The Curse of Monkey Island, 1997)

“You may call me ‘Murray’! I am a powerful demonic force! I am the harbinger of your doom! And the forces of darkness will applaud me as I stride through the Gates of Hell – carrying your head on a pike!” – mighty strong words for a skull with no appendages. Still, we have to admire the spirit of Guybrush Threepwood’s evil companion, bless him.

A sidekick? Batman’s feline-themed antagonist would scratch your eyes out for calling her that. Truth be told, for a good chunk of Arkham City, the master thief is a playable character in her own storyline – at least if you bought the game new, or ponied up for the DLC. It was a controversial move, given that Catwoman’s storyline was integral to the plot. Mind you, Selina Kyle would probably have enjoyed all the fuss.

Forget C-3PO and R2-D2 – the best robot in the galaxy far, far away is clearly this homicidal assassin droid, always eager to engage in some unadulterated violence against “meatbags.” Query: Who wouldn’t want him in their party?

What could possibly make for a better sidekick than man’s best friend? Fable II’s dog tracks down treasure and even fights enemies for you – and the game’s ending uses the emotional attachment you’ve build up with your hound over the course of the game to force an heart-wrenching dilemma on you.

While her cries of ‘Hey, listen!’ were borderline maddening, Navi’s help and guidance were invaluable to the young fairy-less Link as he grew into a strong enough warrior to defeat the evil Ganondorf. Fun fact: She was also the first character in the series to have voice acting.

A red-crested breegull that resides in the backpack of a bear called Banjo might not sound like one of gaming’s greatest sidekicks, but Kazooie’s wisecracking attitude and plethora of talents – ranging from flying, shooting eggs, running up slopes and pecking enemies – was welcomed by gamers and bears alike.