Home / All hail the robot snake

You might recognise this bringer of doom from less threatening times when we wrote about its cute ability to climb up pipes. Now it’s advanced we’re starting to look at it in a less shiny light. The Biorobotics Laboratory at the university has always had the intention of creating a slithery structure that can creep into small spaces, ideal for military scouting and search-and-rescue missions.

The robot’s creators claim it’s only strong enough to hold itself up. But in the interests of self-preservation, if it’s thrown our way, we’re not going to test that out by standing still.

[Biorobotics Laboratory via The Verge]

RetroN 5 – one retro console to rule them all 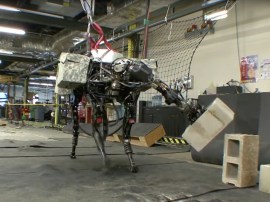 RetroN 5 – one retro console to rule them all

This pipe-climbing snake robot is adorable

This tiny little fellow could one day be used for rescuing people from piles of debris. Skynet, keep your hands off