Amazon’s latest Echo and Echo Dot speakers now boast the ability to activate and deactivate other connected devices in your home, such as smart lighting, when they detect people entering or leaving a room.

Released in October 2020 as part of an Amazon hardware event, the 4th-generation Echo and Echo Dot are capable of emitting a silent ultrasound wave to detect when people enter or leave a room in your home, thereby adding motion detection to their already impressive array of intelligent features.

The feature has now been enabled by Amazon and means you can turn it on or off via the Alexa app. After that, anyone with a bit of know-how (and patience) can tweak their device’s occupancy routines.

Potential functionality includes simple but extremely useful things like turning on Philips Hue lights when someone enters a room, to more specific triggers like having Alexa play a certain song or playlist when movement is detected somewhere at a particular time of the day. We’ll leave you to imagine the potential use cases for that one.

Obviously the flip side is that you can also configure Alexa to turn things off when a lack of motion is detected for a set amount of time.

In terms of how the tech actually works, the inaudible ultrasound that’s emitted essentially bounces off nearby objects and is relayed back through the Echo’s mic – and when a space is detected as being newly filled or empty, Alexa goes to work talking to your other smart home devices.

It’s another step in the right direction for those (including Amazon) chasing the dream of the truly ambient smart home, whereby the things you want to happen are pretty much automatic, with minimal user prompts. This is either extremly scary or extremely cool, depending on how privacy conscious you are.

The new 2021 Echo and Echo Dot sell for £89.99 and £49.99, respectively – although if that’s pushing the boat out a bit too much, there are loads of great early Amazon Black Friday deals available for older Echo speakers.

For instance, you can get the 3rd-gen Echo Dot on a 2-for-1 deal by using the code ECHODOT2FOR1 at checkout today. 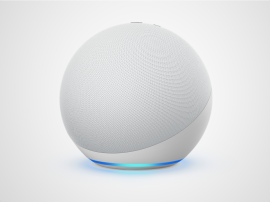