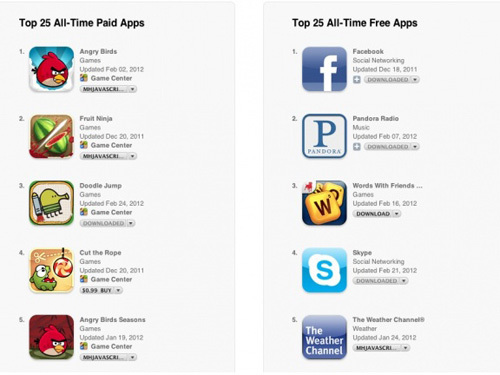 Want to know the best ever iPhone and iPad apps? Well, if you trust the hordes of other Apple fans, then the most downloaded paid for and free apps in the App Store’s history should give you a clue.

The free iPhone apps are a little more practical with Facebook unsurprisingly claiming the number one spot. Pandora Radio, Shazam, Skype, Google Earth and The Weather Channel also turn up in the top ten.

The best iPad apps are fairly easy to guess, too: iPad owners have been forking out for Pages, Angry Birds HD, GarageBand and Scrabble for iPad and enjoying freebies like the free version of Angry Birds HD, Skype for iPad, Kindle and Netflix.

So if you’re not sure what iPhone or iPad app to download next, and you want a modern App Store classic, take a look at the full list here.

Futulele turns your iPad and iPhone into a ukulele