Apple may have failed to come up with a flash-memory based laptop in its latest refresh of the MacBook line-up but it looks like Sony’s picking up where the Apple rumours left off.While we’ve already been drooling over the case and keyboard, specs released in Japan for the new 11.1in super portable, the Vaio TZ, have a few interesting surprises beside the ultra low-voltage Celeron M processor – configurable up to the heat-shunning Core 2 Duo U7600 – and up to 2GB RAM.Our Japanese isn’t too hot but from what we can tell, the new lappy will be available with 32GB of flash memory in a single solid state disk, or SSD for short.It won’t be ditching the traditional carbon spinning hard disk entirely. Instead, SSD models will chuck out the CD drive and replace it with a standard 2.5in hard disk.With the Vista OS and other frequently accessed programmes on the SSD, and all the bulky stuff on the hard drive, the TZ will have the benefits of booting up in seconds without sacrificing any storage space. Not having to spin the hard disk for every task should also help stretch out that battery life.It’s out later this month in the land of the rising sun – no word yet on when it’ll shine on us.

A pair of new touchscreen PCs – one that converts to a tablet, one for desktop use 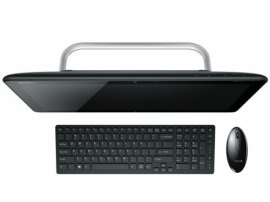 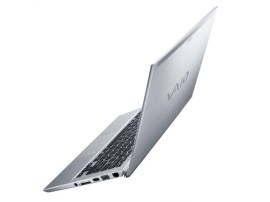