The portable burner enables you to create Blu-ray, and standard DVD, discs directly from your camcorder.  Freeing you entirely from your computer, you could be filming a party in hi-def and handing out incriminating Blu-ray discs by the end of the night.

The DW100 will handle MPEG-2 for standard video with high definition video recorded with the AVCHD codec.  It weighs in at almost two kilos and is a backpack-size 180x70x275mm.

The main attraction for us is that shooting in HD can cane a camera’s memory harder than a public schoolboy. But with the DW100 we could offload footage from the camera onto disc and carry on filming to our heart’s content.

No words on the DW100’s burning speeds, let alone anything about the UK model. We hope it won’t take too long, funny cats don’t just film themselves, you know.

100 Best Gadgets Ever: Little Green Robots vs The World

From the first great Android phone to the iPad, this three-year period is packed with some of the most iconic gadgets and apps of the modern age 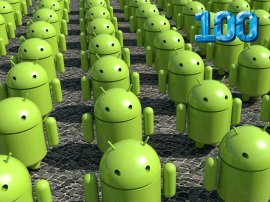