What time do you call this ALK? First you prime us with info of your new sat-nav software, then you leave us hanging for eight months. Well never mind, because CoPilot Live Mobile 7 is finally coming to Windows Mobile devices.Sporting a host of new features, as well as some perennial old faves, it’s now fully compatible with the latest 6.0 version of Microsoft’s portable OS.New in this release is simplified destination entry with predictive address matching, to second-guess your journey plans, and redesigned 2D and 3D maps to make them easier on the eye.Also fresh is the snazzy new PC software, CoPilot Central, that adds new safety cams and plans routes at home before setting off.Back for another blast is the free location tracking, allowing others to follow your meanderings online (with permission of course) and beam you messages and fresh destinations in realtime over the interweb.The full European maps can also be upgraded and peeps with Bluetooth TMC receivers can now get free traffic info, or it can be downloaded by the phone for an extra £35 a year.It’s making its first appearance right now on T-Mobile’s MDA Vario III (pictured) or you can hang on ’til later this month when it’ll be making its way in to Carphone Warehouse, O2 and T-Mobile stores. Better late than never, eh ALK?EssentialsALK CoPilot Live Mobile 7, upgradePrice: from £80, £50On sale: 22nd OctoberContact: ALKRelated stories:Garmin sat-nav goes mobileGPS Blackberry never loses sight of the officeGadget of the day – O2 Xda Orbit

The wait is over. CoPilot Live Premium arrives on iOS today 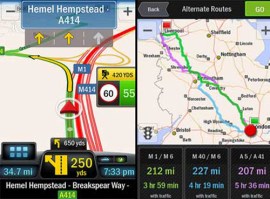 While we wait for TomTom’s iPhone car kit to hit shelves, CoPilot has just released its first update for it CoPilot Live app.Users will benefit an imp

While TomTom has been taking its time getting its sat nav app to the iPhone, yet another company has overtaken them at getting their app into the App