Tesla Model S and Model X owners have one less parking problem to worry about.

A new Summon mode just got added to the autopilot system, which lets you jump out of the car and watch it park itself from the curb. Or watch your slack-jawed neighbours, while you hide in the bushes.

It’s designed for tight spots like garage doors, where you could squeeze the car in yourself but wouldn’t have any room to open the doors. A few taps on the key fob or your smartphone definitely sounds better than clambering through the windows.

It can open and close Homelink-enabled garage doors, too, and works in reverse so you can have the car ready on the road without stepping outside first. With remote heating through the smartphone app, you’ll barely feel the chill on cold mornings.

Summon is part of the 7.1 software update, but the feature is still in beta. Tesla owners will have to enable it manually. Even then, it’s not ready to hunt down a parking space while you jump out to do your shopping – it can only drive or reverse in a straight line.

You won’t need to stress about squeezing into a space, though. The 7.1 update also adds perpendicular parking to the Autopark mode, which could already cope with parallel parking.

Autopilot got a few other tweaks and fixes. It now won’t be able to go more than 5mph over the limit, and can’t be used on residential roads. It should also automatically spot oncoming curves and reduce the speed accordingly, and shouldn’t get quite so perplexed by highway exits and offramps.

It’s not quite the Jetsons yet, but it’s close.

11 reasons why cars are the most exciting gadget of 2016

From autonomous driving to whatever Apple’s working on, we’ve compiled a comprehensive car tech lowdown 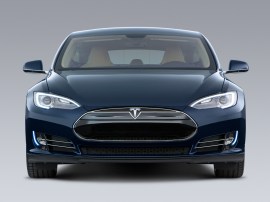