We’ve been lucky enough to have a play with the new Cambridge Audio NP30 music streamer – and first impressions are pretty good.

Designed to match Cambridge Audio’s Sonata hi-fi range, the NP30 has the same classy compact casing – just 27cm wide. CA has always been good at making its relatively inexpensive products look and feel like they cost far more, and the same applies here.

So, what can it do? Well, it’ll connect to your network via Wi-Fi or Ethernet and stream almost any music file you can throw at it, right up to the fashionable-among-audiophiles 24-bit FLAC format.

It also gives you access to over 15,000 internet radio stations, easily browseable by genre, mood, location of origin, etc. We had a look for some ‘aggressive hip-hop’ and ‘stressful rock’ and it turned up some useful results. Then there was that 16Kbps station from Turkmenistan…

If you find any net stations that aren’t available on the NP30, you can send their details to Cambridge Audio, who’ll vet them for quality and add them to the list if they pass the test.

The 4-line display doesn’t look much, but it just about does the job, while the scroll-knob (which you push in for Enter) makes sifting through thousands of tracks or stations pretty quick.

Outputs are coaxial digital, optical and standard stereo phono, so there shouldn’t be any issues hooking it up to a hi-fi system or a DAC.

Talking of DACs, the NP30’s internal DAC isn’t quite up to the spec of Cambridge Audio’s DACMagic, but it sounds a safe bet that a more upmarket streamer will be launched next year to match the styling of the company’s 650 range.

The NP30 will be available in October, and we’re told to expect a price under £400. Keep an eye out for a full review before launch.

But there’s space inside for HDR and Dolby Atmos. Where do we sign up? 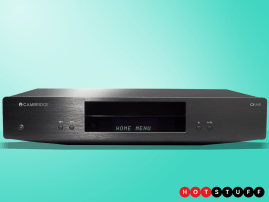 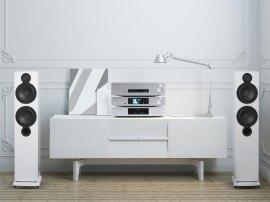