Forget UMPCs, suddenly tiny shrunken laptops are where it’s at. First Palm’s 10in Foleo and now this – a 7in Vista lappy from chip makers VIA.The $600 NanoBook isn’t actually set for release but rather a reference design pointing the way for PC builders to follow. Packard Bell’s already signed up and we should be seeing its carbon copy EasyNote XS before the year is out.But it’s not quite as titchy as the 7in badge might first suggest. Next to the screen is a sizeable slot for taking various add-ons from VoIP phones, 3G cards, GPS modules or, rather meekly, an LCD weather station (pictured).As well as the tiny 800×480 touchscreen the little fella gets a 1.2GHz VIA processor, 1GB memory and a 30GB hard drive. Naturally it’ll only run the Basic version of Vista, but can also be specced with Windows XP or free livin’ Linux.It makes for an interesting challenge to Palm’s Foleo – a similar size device with a much larger and higher res 1024×768 10in screen, and the benefits of instant on, but only running Palm’s cut down version of Linux. And then there’s the much rumoured Apple, er, NanoBook, said to pack OS X and a flash memory hard disk for Foleo-matching start up times. This could get messy.Essentials VIA NanoBook Contact: VIA Related stories: Palm Foleo – a whole new computing category is born Fujitsu primes a QWERTY UMPC HTC starts Shifting UMPCs

The Asus Eee series is a relatively new tech family, but the sheer number of members it has added in its few short years on earth means we had to delv 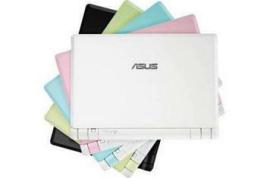 Asus EeePC to get Eee-ven better

We’re still enamoured with our tiny 7in EeePC 701, and now it seems more is on the way. The main marketing man at Asus, Jonathan Tseng, has been telli

Asus’ EeePC 701 isn’t the only tiny laptop in town. It’s got some competition from fellow PC maker Packard Bell.Unlike its mung-bean-chewing rival, th