Rumours of Huawei bringing quad-core superphones to Mobile World Congress appear to be bearing fruit – and it looks like the Chinese company could be bringing its own quad-core processor to the party.

Huawei had inadvertently let slip plans to launch a new quad-core phone – the Ascend D1 Q – at MWC, to sit alongside its Android 4.0 dual-core Ascend P1 S (pictured). And the assumption had been that the Ascend D1 Q would come rocking a Tegra 3 processor like the rumoured LG X3, HTC Endeavor and Asus Padfone.

Now, if the scuttlebutt over at The Verge is anything to go by, Huawei is prepping a quad-core processor that could be up to twice as fast as the Tegra 3. Whether it’ll be packed into the Ascend D1 Q has yet to be confirmed, but we’ll find out for sure at MWC.

If those specs are to be believed, Huawei’s move into high-end smartphones will shake things up with reprecussions on the Richter scale. We’ll be bringing you the latest from Mobile World Congress on our dedicated MWC page later in the month – and this is one rumour we’ll be investigating with interest. 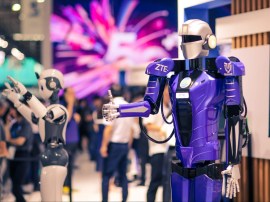