That looks awesome, but is it real?

It’s real in the minds of Vauxhall and Opel designers, who have created the Rad e electric bicycle concept you see here. Although the real deal has yet to hit the streets, Opel’s planning to put it into production. Which is a good thing, as it’s not just looks that this super cycle has going for it.

The Rad e packs a 250W motor with a lithium-ion battery built into the downtube (much like the Specialized Turbo). It can churn out 40 to 90 miles of assisted power depending on the terrain – pretty wide margin of error there, guys. But with 40Nm of instant torque you can easily average twelve and a half miles per hour.

That’s alright – but why does it look like a boomerang?

The frame shape is, apparently, the product of automotive design techniques. It’s made of hollow pressed steel, making the frame strong and light. It can also be attached to your car via the FlexFix bicycle carrying system – so it can be charged in transit, if you’re planning to embark on an odyssey. 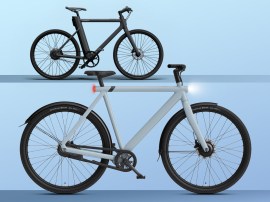