Apple’s has unveiled a suite of new goodies in its computer range. But which of these beauties will you lust after while looking despairingly at your bank balance?

Don’t expect Apple’s topline power box to have got a makeover. But inside that monolithic aluminium structure the hardware configuration has been tweaked to produce up to 50 per cent more processing power from as many as 12 cores. Intel’s quad- and six-core Xeon chips (the latter capable of overclocking to 3.6GHz) ride next to ATI Radeon HD 1GB graphics. And Apple has thrown in the option to stack four SSDs instead of spinning platters to take the sting out of head crashes while rendering Shrek 5.

Base spec and prices:

Like the Mac Pro, from the outside, you might not guess that the iMac had had a spec hike. Apple’s all-in-ones now pack core i3, i5 and i7 Intel innards, while they’re also carrying new ATI Radeon graphics hardware to blast HD video and games to the IPS screen. Larger models now come with the option to ship with a 256GB SSD instead of a spinning drive.

Base spec and prices:

Oh, yes, and you might want to pick up a Magic Trackpad with that. What is it? Head here to find out.

Apple has also beefed its Cinema Display to 27 inches and it, too, has the IPS display tech seen in the iPad, iPhone 4 and new iMac, allowing for a viewing angle close to 100 degrees. Why isn’t it called a monitor like everyone else’s computer displays? Because it’s going to cost a lot and the word monitor sounds too cheap for Apple divas. We don’t know how much it’ll be yet, but the US price is $1000. We should hear the painful news (expect close enough to £1000) before the September launch.

– 5 of the best Apple alternatives

– Jobs on iPhone 4: we’re not perfect 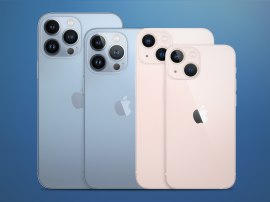