Is that a robot that will pour me beer?

Got it in one. KegDroid might just be our new best friend – this friendly, green bot is hiding an Arduino microcontroller inside to control the flow sensors and valves needed to make your drinks keep flowing plus it uses an app-laden Motorola Xoom tablet and NFC reader for authentication.

Once you’ve got the magic keys to KegDroid – an NFC badge – you’re all set and as one clever YouTube commenter pointed out, the dream would be to stick NFC chips on the bottom of glasses, with some kind of logo detection, so you can just plonk it down for your next refill.

OK, let’s go to the bar where this is happening.

The demo video was posted by “home brewer” (and Google employee) Paul Carff and we’re sure if you sent him a message, he’d be happy to have you over for a pint. This little Droid has big ambitions though as Carff hopes to see KegDroid rolled out across the world. Now that we’d like to see.

Viral of the week – The Dark Knight Rises trailer 3

Microsoft teams up with Barnes & Noble to enter the ebook arena

Skyrim Kinect support is out today

The day has come to unleash the power of the Dragonborn for real. Fus Ro Dah!

Jetpack Joyride and Sonic coming to BlackBerry PlayBook and BB 10 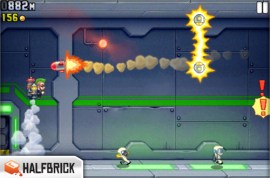