Home / News / Just because they could – US$1.9 million pedal-powered electric supercar

We’ve seen a whole host of crazy things in our time here at Stuff Towers, but we can safely say that nothing has ever needed to not exist, as much as this engine-less, pedal-powered Ferrari lookalike – the Fahrradi Farfalla FFX.

The frame of this two-seater ‘car’ is constructed from ultra-light aluminium tubes and comes packing an 11 gear mechanism that powers the pedal-driven wheels. No engine here folks.

Still, you’ll get working gullwing doors and 200 LED-powered headlights for a more authentic look. And that red paint job of course.

And the price tag for this franken-car (which incidentally has a top speed of around 10mph)? A whopping US$1.9 million. We’d rather have Audi’s 50mph electric bike, thanks. 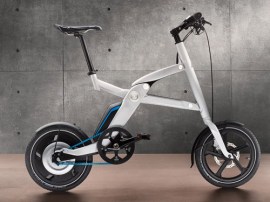 Hybrid Ferrari Enzo is on the way

Apple’s iTablet gets a name shuffle to reflect its 4G capability. No more confused gadgeteers, we hope