Much like a high–end pair of denims, the difference is pretty subtle. Not so the price tag. Mr Strauss and Co will relieve you of around £400 for the privilege of owning a phone that packs in an MP3 player, 2MP snapper and a, er, metal chain.

Still, it comes with some neat red styling and there are only 100 available. Which we suppose puts it in the bracket of those Levi’s you pay over a ton for in Selfridges.

Other features include stereo Bluetooth, a bundled hands free kit and a so–called premium presentation box. Not that you’ll be carting that around in your man bag mind.

Take a peek at the original Levi’s fashion phone

Nike and Levi’s team up for skater-friendly jeans 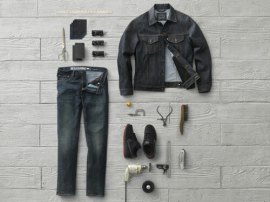 The two pillars of modern gadgetry are the mobile and the MP3 player. At least, that’s what Levi’s Senior Vice President of Product You Ng

Levi’s phone to spend one night in Paris

The fashionable streets of gay Paris are expecting a visitor next week. Usually more at home on the dirty streets of East London or down the front at