There’s a new condition sweeping the country, people are dropping like Big Brother contestants in a dignity contest as ‘dongle envy’ grips the nation.They say size doesn’t matter, but when we’re talking dongles, it’s all about how small yours is, and Logitech’s new VX Nano cordless laser mouse may be just the product to make you talk of the office.The tiny USB micro-receiver (pictured, left) that comes bundled with the VX Nano means that the days when your more successful colleagues openly laughed at the piece of plastic tethered to your lappy will finally be over. In fact so dainty is the receiver (it’s the world’s smallest, according to Logitech) that once you’ve attached it to your USB socket you’ll barely notice it’s there.Unlike its VX predecessor, the Nano sports the same MicroGear Precision Scroll Wheel found on its bigger brother, the MX Revolution, which automatically switches between standard precision-scrolling and fast, frictionless whizzing through long documents.It’s also had a slight redesign in the looks department to make it ultra-portable and an extended battery life of up to six months.Make your dongle-toting mates jealous from next month.Essentials Logitech VX Nano Price: £50 On sale: August (pre-order now) Contact: Logitech Related stories: Logitech mouse gets waved like a wand Dell’s m1330 slides into the record books GLaser Mouse likes glass, hates cheese

Wireless gadgetry is close to all our hearts, but it does have a problem: the juice doesn’t flow forever. Logitech’s latest keyboard and mouse combo, 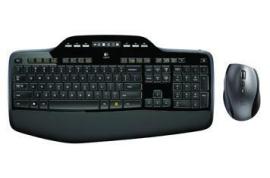 Good news two-fingered QWERTY stabbers! Turns out your feeble finger prodding may not be the fault of your general failings as a human being but rathe