Remember Microsoft’s Illumiroom prototype? It’s a projector system which extends your onscreen gaming antics beyond the TV screen, like Philips Ambilight on steroids. And now it’s back, and better than ever.

Called RoomAlive, the revamped system consists of multiple projectors and Kinect cameras connected to a control device which keeps everything in sync.

The setup is capable of scanning a room and self-calibrating itself according to the surrounding geometry within a few minutes, and once its complete, it’s time to play.

You can stomp, hit or shoot virtual enemies crawling around on your walls, and any damage you take is shown off by virtual ‘blood’ that’s painted over your clothes, thanks to body-tracking magic.

The projectors can also overlay textures on your surrounding walls, transforming your Ikea-laden living room into a rainy forest with stone-walled ruins. Walls with booby traps that shoot arrows at you which you have to avoid, Indiana Jones-style.

Another demo shows off a controllable miniature hero which can run around your coffee tables and blast away at killer robots which emerge from your walls and floor.

It’s all clearly a long way off from infiltrating our homes – unless you’ve got an insider at Microsoft and enough money for multiple projectors and Kinect cams that is- but it’s still an exciting glimpse into the future of gaming where ducking for cover behind your dog will become a real possibility.

You won’t know where reality ends and perception begins 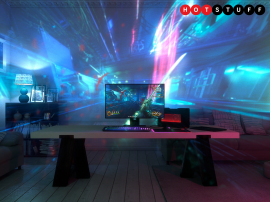 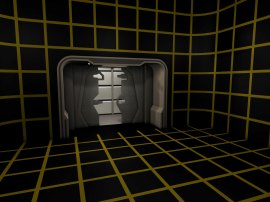