Good news, clumsy people – scientific research may have just created a self-healing plastic that could be used within tablets, smartphones and all the other gadgetry we know and love.

Self-healing surfaces aren’t strictly new but up until now a major stumbling block has been conductivity. Because current polymers are unable to play nice with electricity, they can’t be used for capacitive displays, a common feature of gadgets of today.

But Stanford University has created a plastic that, thanks to nanoscopic nickel particles in the material, does away with that pesky electrical limitation. This means your smartphone could now, in theory, remove a scratch or dent caused by your cack-handedness without the need for any repairs (and not at the expense of a touch display), restoring your beaten up old phone back to its former glory within mere minutes.

Before you get too excited, you have a long time before the almost unbelievable material hits the shops. Expect it to ship with the iPhone 8/Lumia 1320 at the earliest – assuming it becomes commercially viable. Fingers crossed it does though, because no one likes it when their pride and joy gadget collides with the floor.

This Lego camera gives Instagram a run for its money

Google and Asus offer money back to early Nexus 7 owners

5 materials that could change the world

From cotton-thin body armour and self-healing plastics, to bendable screens and robot leaves – the future of materials looks tangibly tantalising 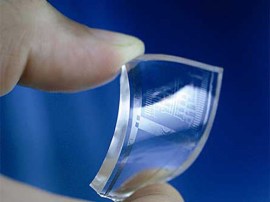