Sony Ericsson has set the date for Thursday to unveil its latest crop of Nokia-baiters. Naturally, the wraps are being kept very firmly on, but there’s been enough info floating around on the web for us to put together a potential line-up for the event.Topping the list is the expected K800 (pictured) successor, the K850, currently codenamed Sofia. It comes with more question marks than answers, such as will it have a touchscreen and will it run Sony Ericsson’s smartphone UIQ OS? But it does look as if it will have speedy HSDPA and a 5MP autofocus cam, set to eclipse the Nokia N95 by being paired with a proper Xenon flash.Then there’s the possible update to the W950 Walkman phone, the W960, or Mooi as it currently likes to be called. Again, few deets, but its headline feature looks likely to be an iPod nano-matching 8GB of Flash storage.Finally, it seems that someone’s been playing with the new Sansa Shaker because another Walkman phone, dubbed Shinobu, is rumoured to be getting tilt and shake controls to skip and shuffle tracks, as well as dedicated gaming keys.All will be revealed on Thursday night – see us first thing Friday for more…EssentialsSony Ericsson Sofia, Mooi, ShinobuPrice: TBAOn sale: TBAContact: Sony EricssonRelated stories:Sony Ericsson’s P1 smartphoneFunky young SanDisk shakes to the beatSony Ericsson goes HSDPA 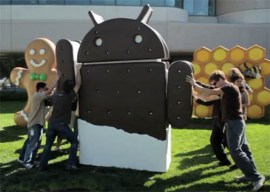 Dizzy from all the Apples, Droids and mobile contracts fighting it out? Here’s a hassle free music phone with big dollop of Walkman heritage