We thought Philips had thrown up the white flag on portable players long ago but it’s back and ready to fight, with the Streamium SA9345Measuring a minuscule 9cm long and weighing in at a gram less than the new Nano, it’s a diddy player indeed.MP4 video’s no problem, but its 1.8in 220×176 pixel LCD can’t match Nano’s 2in 320×240 display and it’s down on battery life too – 10 hours versus Nano’s 24 hours. Ouch.What about capacity? Er, a maximum of 4GB for the same price as Apple’s 8GB models. Oops.Still, Philips can fight back with Windows Media Player compatibility, some LG Chocolatey touch sensitive controls and an FM radio – bish, bosh, bash. It’s out now in black and blue, appropriately.EssentialsPhilips Streamium SA9325 (2GB), SA9345 (4GB)Price: £100, £130On sale: NowContact: PhilipsRelated stories:Microsoft drops new ZunesSansa has a View to a killThe iPod Touch is here – and it’s Wi-Fi 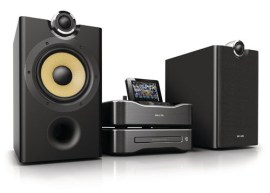 We’re getting a bit tired of all these music streamers and iPod docks cluttering up our living room but Philips has the answer.Its all-in-one hi-tech,