Fleetwood Mac was all about Rumours in 1977, but these were the real deal…

The first all-in-one PC had a tape deck and monitor built in and its engineering would later spawn the Commodore 64. It flourished in American schools, but was quickly replaced by the Apple II (also released in 1977) in the hearts of enthusiasts.

The internet can’t possibly handle any more information about Star Wars, so we’ll refrain from further comment. Except to say that before you leave a comment saying we’ve got the title wrong, we haven’t – the Episode IV: A New Hope bit was added later.

Originally sold as the VCS, but known universally as the Atari, the 2600 was a bona fide superconsole and allowed people to play Space Invaders at home. That in itself was wildly exciting at the time.

Activision’s Pitfall was not only a bestselling title for the Atari, it was one of the first platformers ever and the graphics were amazing.

If massive (fictional) traffic accidents were your thing, then CHiPs was the show for you. Motorcycle patrolmen Ponch and Jon wore fittingly ridiculous shiny knee-length boots throughout.

Elvis shook off his mortal coil after one too many burgers, and Lynyrd Skynyrd’s plane became a free-falling bird. But punk was taking rock ‘n’ roll rebellion to new heights and Concorde got off the ground with the inauguration of its supersonic London to New York route.

The Blast! family is a set of HDMI dongles that infuse retro-gaming goodness into your telly

Blasts from the past 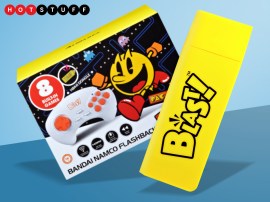 Ranked: the 10 best game controllers ever

Hey, button mashers! Where does your favourite land? 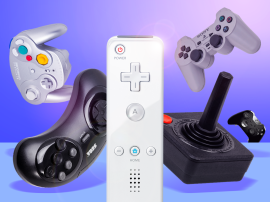