LA’s gaming expo, E3, is but one short month away and the rumour mills are in full spin. Latest to reach the surface is speculation that the PSP is to get its overdue makeover.It’s not, we’re hearing a PSP2, but more of a Ninty style ‘lite’ offering. Word is, it will be thinner than the original with a new LED backlit screen, which promises to be brighter and should save on precious gaming juice.The UMD slot stays but it’ll be faster loading and up to 8GB of flash memory will be squeezed in alongside. And our thumbs could finally get what they’ve been crying out for; a redesigned D-Pad – not too dissimilar to the PS3’s controls, we hear.Of course, it’s all gossip at the moment and Sony’s refused to comment but we think there’s more than a grain of plausibility in this one.Essentials Sony PSP Price: £130 On sale: Now Contact: Sony Related stories: It’s PSP Remote Play day It’s good to talk – on your PSP PSP gets set for Go!Cam

The biiiiig picture: Sony’s new 4K TVs go all the way up to 100in 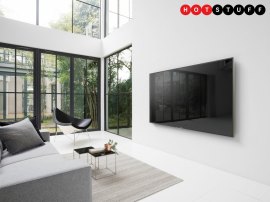 No platform is safe from those catapulted bundles of feathers