We were sent into a spin over the weekend by the Sony tease shot, dubbed ‘the Drive’, on the left: a gift wrapped new NavMan? No, er, Vaio? No, er, cheese cutter?No, no and thrice no. It is, in fact, as the removal of the fetching green ribbon attests, Sony’s first consumer OLED TV, the XEL-1.And there was no need to go so chunky with the modesty-hiding band because, just like the prototype we saw in April, the 11in screen is a mere 3mm thick. Yes, 3mm.But there’s more. As we place a Doctor Evil finger to one side of our mouths and tell you it sports a 1,000,000:1 contrast ratio and a leccy-sipping 45W power draw.The downside? It’s Japan only at the moment and, with just 960×540 pixels, it’s not HD – but who cares when we’ll be looking at it side-on so much?EssentialsSony XEL-1Price: £TBA (¥200,000 in Japan)On sale: TBA (1 December in Japan) Contact: SonyRelated stories:Toshiba’s Regza XF – slimmer of the yearSuper slim TVs – prepare for the futureYour 2006 monitor: an easy on the eye Samsung OLED 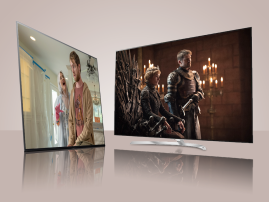 Sony is set to delay its plans for a large-size OLED TV until next year at the earliest, it’s been reported.The successor to the rather lovely but pri

What is it?Organic Light Emitting Diode, a screen technology to rival LCD and plasma.Why should I care?Unlike LCD, which requires a backlight, OLED pi 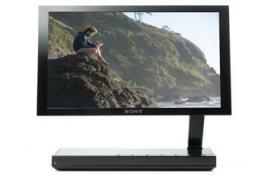