Those Canadians weren’t having us on, Sony’s just slipped us the press release confirming the slimline T200 and T70 touchscreen cams that leaked out on Sony Canada’s website on Monday.It’s also passed us the deets on this new super-zoomer, the H3 (pictured), which shoves the H2 aside by upping the megapixel count from 6 to 8.1 but cutting the zoom from a colossal 12x to a still generous 10x optical effort.It’s enabled Sony to slim the whole thing down to more pocketable proportions – not quite rivalling Panasonic’s TZ3 super-zoomer, but getting there.It crams in Sony’s Super SteadyShot optical image stabilisation plus face detection for well-focussed people shots. It’s also nabbed the Dynamic Range Optimiser from the DSLR Alpha to tweak the exposure and contrast of pictures with bright backgrounds so your subject doesn’t end up a shadowy silhouette.It’ll be out early next month along with its two touchscreen chums. No word on how much they want for them though. Perhaps we can just give them what we think’s fair.EssentialsSony Cyber-shot DMC-H3Price: £TBAOn sale: September Contact: SonyRelated stories:Smile, you’re on a Sony T200Canon debuts octuplet of new camsPanasonic cam goes thin and wide 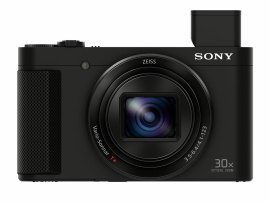 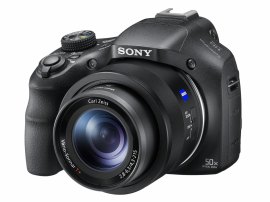 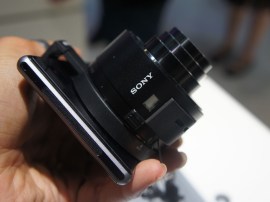