We only clapped eyes on the first pics last month but now Samsung’s latest MP3 player is winging its way into UK stores.At just 8cm long, 2.5cm high and weighing in at a slight 23g, it’s small enough to step on Shuffle‘s toes, while the potential 4GB capacity means its starting to nibble at Nano territory.The light-up cap on the end hides a retractable USB plug and while it’ll play with MP3, Napster-friendly WMA and Ogg Vorgis it won’t talk to iTunes Plus AACs. We’ve also been given the skinny on some of its more advanced features. As well as an RDS FM tuner and Samsung’s DNSe 3D sound enhancement it’ll conjure up mood-matching playlists – a la Sony’s housebound Giga Juke Hi-Fi – that’ll select tracks to suit your listening requirements from pumping Rocky-style gym tracks to leisurely summertime Sunday strollers.Catch it by the end of the month in one of five fetching colours. Or rather four fetching ones plus pink.Essentials Samsung YP-U3 1GB, 2GB, 4GB Price: From £40 On sale: June 2007 Contact: Samsung Related stories: Gadget of the Day – Sony Giga Juke NAS-50HDE New Samsung YP – here in a flash Samsung readies mini MP3 spinner 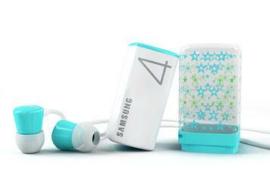 Samsung certainly hasn’t been resting on its lederhosen at this year’s IFA show. Not content with giving a MacBook Air-baiting laptop, a c

Samsung S2 coming to the UK

Samsung has confirmed it’s bringing its S2 ‘pebble’ MP3 player to the UK this summer. The dinky jukebox, which they hope will dent t