Just when we think our Lego skills have advanced far enough to build our own Lego jet engine, some Lego prodigy comes along and puts us in our place.

The latest Lego maestro to do so is 18 year old Harry Bossert, who has reenacted the top 10 moments of 2012 in a stop motion Lego video who covers everything from HRH The Queen plummeting out of a helicopter to Bradley Wiggins and PSY mastering their respected fields.

There’s even an appearance by a Lego-ified Felix Baumgartner as he leaps down towards a model of Earth and a victorious Usain Bolt posing after blazing down the track.

Check out the video below and join us in looking back at last year through brick-vision glasses.

When you breathe life into Lego, something magical happens… 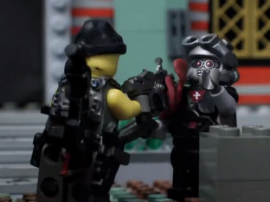