We got the back-from-its-original-release-in-1979 Bigtrak into the office and ripped it open in a flurry of nostalgia. Take a look.

Look at that box! And what’s that? It makes “VOOM VOOM” and “RRRRRRRRR” noises?! A-mazing.

It’s out of the box and looking good. Check out that pseudo-turret thingy and amazingly 80s keypad on the back… Let’s take a closer look at that.

Ah, that’s better. This is where the magic happens (not in the MTV Cribs sense, mind). On this little beauty you can tap out up to 16 different commands, telling Bigtrak to trundle forward, rotate left/right and fire its photon cannon. “VOOM VOOM”, indeed.

Still sitting snugly in part of its polystyrene transport capsule, we had a butchers at Bigtrak in profile. It has six wheels in total, with the middle two doing all the work. Get a load of that swooshy stripe down the side. Mmmmmm.

Up front is that photon cannon, but don’t worry – it’s perfectly safe. Though household pets should probably prepare themselves for a mildly annoying flashy firestorm.

Call us crude, but when we get a shiny new toy, we like to flip it over to check out the undercarriage. Despite our years in gadget school, we still can’t tell if its a girl or a boy… What we do know is that with the help of a screwdriver, three D-cell batteries (almost worthy of their own nostalgia trip) fit snugly inside to power this retro-futuristic toy.

And here it is in all its glory. Fresh out of the same moulds the 1979 original used. Now that Bigtrak is out of its box, it’s time for us to have a proper play with it. We’ll be bringing you a video of that very soon.

In the meantime, you can buy your own at iwantoneofthose.com for £34.99

WowWee RoboScooper tidies up for you

10 robots that ruled the world

Everybody wants to live in a 1950s vision of a robotic future, with metallic servants making breakfast and tidying the house. Here are our 10 robot to 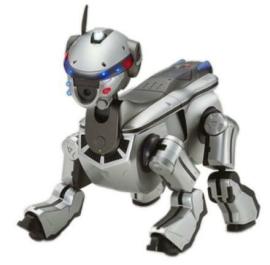