Could it be the iPad killer? Is it any good? Isn’t there something wrong with the camera to make it look so long and thin? The answer to those first two questions will be the subject of an in-depth review when we’ve spent a bit more time with Fusion Garage’s tablet. And there’s nothing wrong with our camera – the screen really is long and thin like that. Details, details. Let’s get the wrapper off first…

Just out of the bubble wrap. We’ll pop that later.

Sans bubble wrap. The excitement mounts. And inside the box…

Is another box. Is this one of those Russian things?

And there’s the back. Less shiny. And that’s aluminium paint on plastic.

One side: power, cans and mic jacks.

Side B: hello USB! Nice hatch.

We have lift off. The screen’s set to ambient mode. It goes much brighter than this.

One for the road. And…

– JooJoo tablet arrives in the UK

And one we’re not quite so convinced about 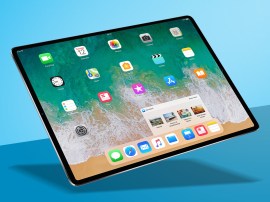