Fears are mounting that the internet will collapse under the strain of multiplayer Halo 3 soon after its European launch tomorrow. Already under great pressure after the game launched in the US earlier this week, the information superhighway will have to withstand an unprecedented amount of traffic as European Master Chief fans join the global frag party.

The UK launch will be preceeded by a VIP party at London’s BFI IMAX theatre, hosted by rapper Pharrel Williams, where a select number of gamers will get to play the game precious hours before it goes on sale to the Euro masses at midnight tonight. Oh, and if you’re reading this on your smartphone from your sleeping bag outside GAME on Oxford Street, find another shop. The council has told them they’re not allowed to do a midnight Halo 3 launch – all those rabid video game fans together in one place is too dangerous, apparently. 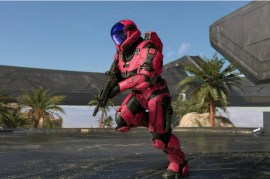