The latest item to top our ‘things we’ll buy with our lottery winnings’ list is a US$20,000 arcade cabinet which can play almost any videogame released since the first pixels escaped from the primordial gaming ooze aeons ago.

The custom built gaming haven includes a handmade cabinet housing a 55in Samsung LED TV as well as a 37in LG display at the top of the unit which shows off images during gaming sessions.

Controls are also in abundance, with colourful LED buttons, joysticks and trackballs as well as steering wheels, flight sticks and light guns. Console controllers can also be used, which will come in handy when firing up the included PlayStation 3, Xbox 360 and Wii consoles.

With MAME and MESS software emulators and a custom UI to easily switch between games, it’s a good job there’s a powerful Alienware Aurora R4 with a 3.9GHz i7 CPU, 16GB RAM and an AMD 7950 GPU under the hood.

A Blu-ray player and 232W speaker and sub round off the package – and with 50,000 games at your disposal, the hardest decision will be what to play first. Once you round up enough money to actually buy the thing, that is.

Would you pay over US$20,000 for the world’s thinnest mechanical watch? 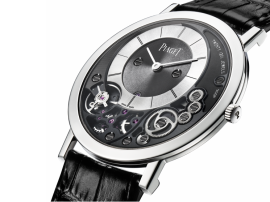