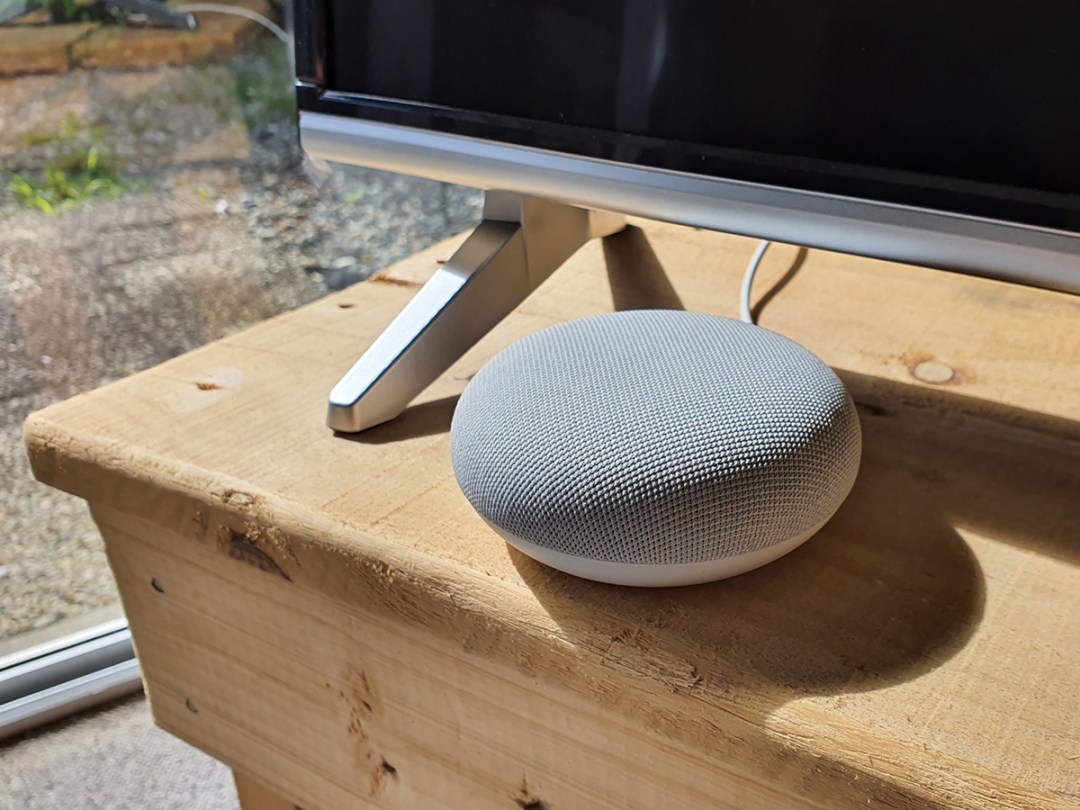 What’s in a name? According to Google, the Nest Mini is a louder, cleverer version of the Google Home Mini as the company starts to merge its Nest acquisition in with its core product line.

If you’re comfortable chatting away to a small fabric blob to find out the weather, play a podcast, listen to a recipe or ask what the capital of Fiji is then the Nest Mini is one of the cheapest and reliable voice assistant speakers you can buy.

Think of it as a just-as-capable-but-not-as-loud sibling to the larger Google Home, which has not yet rebranded to Nest, confusingly. If it’s audio chops you’re after though, then Google Home is now only £40 more at £89. But the advantage of the Nest Mini is its size and the attraction of placing one in several rooms of your home.

Despite its diminutive looks, the speaker can fill a room as well as a portable radio and will do what you want so long as you ask it nicely.

You’d have to be the Columbo of consumer tech to tell the Nest Mini apart from the old Home Mini. Nor would you tell the fabric speaker cover is now made from recycled plastic bottles. There’s a fetching new sky-blue colour – we reviewed the standard chalk – and there’s also red and black versions.

A new addition is a built-in wall mount that lets you hang the Nest Mini up like an inverted smart pendulum. Once you get over the odd look, it actually means the speaker is around head height and can sound better in the right position compared to when it’s on a shelf or table.

You’ll still need to have it plugged in of course, and that plug is now a round one rather than the old version’s micro-USB. You still get the physical switch on the side that turns off the built-in microphone if you don’t want the Nest Mini listening to your every beck and call, but when it on it does render the thing useless.

The biggest compliment you can pay the Nest Mini is that Amazon clearly copied the design for its latest Echo Dot, which used to look like a plastic black hockey puck. The Nest Mini is the most minimalist of smart home gadgets; cute, unobtrusive and zen – when it’s not making a sound, that is.

Google claims the bass of the Nest Mini is two times better than before. We agree with the claim, but we can’t recommend the thing as a replacement hi-fi. It’s perfect for playing podcasts in the kitchen or catching up on the shipping forecast, but once you start playing music it’s not about that bass, just treble. We soon found ourselves turning down the jams and reaching for the Sonos.

But for the less discerning music fan, the Nest Mini is startlingly loud for its size and doesn’t distort at high volumes – you’ll be happy with the sound of it for the price you’re paying.

Another improvement here is the far field voice recognition – we didn’t have to shout over loud music to get the Nest Mini to hear us. Even with guitars and drums blaring a quiet “OK Google” from the other side of the room is enough to see the four dot lights fire up. Often, we had to say our command louder than the trigger words, but it’s impressive nonetheless and shows Google has stuffed some decent microphones into this little thing.

It’s oft forgotten that when Google shipped the first Home Mini, it had touch sensitive controls so broken that Google turned them off globally via a software update. The snafu has flown under the radar, and the hardware was capable of something that no one can use.

Thankfully the Nest Mini’s touch controls work and work well. A simple boop on the nose pauses whatever is playing, with another tap to continue. It can also sense when your hand is close to it, lighting up the volume control LEDs to let you adjust – before you could only do this with a voice command.

Google claims that the Nest Mini adjusts sound depending on the ambient noise, so if the washing machine is going it’ll play louder if needed. It’s very hard to tell if this is the case, but we didn’t have an issue chatting away to ol’ Googs, so no complaints.

The speaker also has a machine learning chip to better understand common commands. This can speed up response time by processing the requests locally rather than in the cloud, but this is currently a US-only feature.

You can even go all in and link your Spotify and Netflix accounts via the Google Home app via which the Nest Mini is set up to control your music and TV. With a Chromecast plugged into your TV you should be able to ask Netflix to stream shows, but in our testing we kept getting an error message. The dream of not even picking up a remote to binge watch six hours of The Crown was so close, yet so far.

Google Assistant: Your wish is sometimes my command

The Google Assistant is always improving, which is the best part of the Nest Mini. The product you buy today will get cleverer month by month as Google processes a world of data requests and enhances the answers and functionality it spits back out at you.

The clever Voice Match feature means it can recognise when it’s you and tailor things like calendar requests to your Google account rather than someone else’s. You can add up to six people at once, which is great if you live in the Google ecosystem.

That said, you will come across questions the Nest Mini can’t answer, usually because it doesn’t get your phrasing. But Google Assistant is far more consistent than Siri, meaning the £49 Nest Mini is substantially cleverer than the £279 Apple HomePod. If you’re starting a smart home project in earnest, it’s on a level with Amazon Alexa.

Barking out for your favourite podcast is easy, but it’s hard to find anything beyond the latest episode and start it from the beginning. There’s not yet the ability to sync the Nest Mini to your podcast app, so picking up from where you are on your phone is a no.

For everything cool the Nest Mini can do, you have to be comfortable with the fact Google is keeping a record somewhere of all your requests and trust it won’t sell that data to advertisers – this is the transactional nature of smart speakers, as Google needs that data to let the thing help you in the first place, and a reason the Nest Mini costs so little.

If you live in Google’s world (and let’s face it, most of us do) then the Google Nest Mini is the best, cheapest way to get into the smart home game alongside the £45 Echo Dot with Clock. If you want close integration with your Google calendar and apps, then the Nest Mini wins out.

It’s worth considering that the better-sounding Google Home is only £40 more, but if you want a small smart speaker to stick in the kitchen, you get a radio, encyclopaedia, recipe book and timer all in one. The fact it works just as well in every room in the house is an excuse to fork out for several.

If you’ve read this far then you won’t mind about the fact you give up your data for the convenience – the Nest Mini is great value for money.

With improved sound, touch controls and a wall mount, the Google Nest Mini is louder and cleverer than ever and will only improve over time

Not loud enough for music at a party

Machine learning is US-only for now