Looking for the cheapest route to 2017 LG OLED TV ownership? The 55in version of the C7 (known to its friends as the OLED55C7V) is it.

Actually, it’s one of two routes because, on paper at least, the 55in B7 is the same TV with a slightly different stand.

Whichever of the two you buy you should get the same performance. In fact, you should get the same picture no matter which 2017 LG OLED you opt for, from the cheap-ish B7 and C7 right up to the “Wallpaper” W7. The further down the range you go, the less advanced the sound is, but for those people planning to partner their new telly with a surround setup or soundbar, they should get everything they need from the C7.

So does that make the C7 (and, presumably, the B7) the pick of the LG range? Indeed it does.

This might be the joint-cheapest 2017 LG OLED but, to our mind, it’s also the best-looking after the impossibly thin W7.

That’s because its speaker system is much smaller and less obtrusive than those of models further up the range. In fact, viewed face-on the speakers are invisible, leaving you a glossy 55in screen outlined by a super-thin bezel, all lifted off your surface by an elegant, silver stand.

Move round to the side and you’ll see that the majority of the C7’s chassis is a big slab of screen that’s just a few millimetres thick. Admittedly there’s a protrusion around the back that houses the speakers, connections and processing gubbins, but the uniform thinness of the rest of the set means it is very striking indeed, particularly if you wall-mount it.

Picture quality: the OLED awesomeness we know and love

While the likes of the Sony A1 have to wait for Dolby Vision to be added at a later date via firmware, LG’s 2017 OLED range has it out of the box, so it’s obviously this that you’ll want to try first. Essentially, all of those Netflix Originals that appear in standard HDR to most tellies will be streamed in Dolby Vision to the C7.

Honestly, on this evidence there’s not a huge difference between ‘normal’ HDR and Dolby Vision, but you can rest easy knowing that when the Dolby Vision logo appears you’re seeing precisely the picture that the director intended.

And what a picture it is. At this point, everyone knows the core advantage of OLED (that each pixel emits its own light, allowing pitch blacks to sit right next to pure whites and punchy colours), but that does nothing to diminish the thrill of seeing one of these TVs in action for the first time.

Imagine an entirely black screen, from the middle of which a bright white logo emerges – a traditional LCD TV with an LED backlight, even a brilliant, high-end model such as one of Samsung’s new QLEDs, needs to raise the backlight to get light to that logo in the middle. You can see it happening and it makes the black of the rest of the image a little less so.

The C7, just like any other OLED, doesn’t need a backlight and doesn’t need to raise the overall brightness of the screen to light the image in the centre. Instead, it just lights each pixel as needed, and the result is much more dramatic.

Of course, you’re not going to spend all of your time watching logos appear on black screens (although you might be surprised at how often you see them in TV shows and films), but it’s a great way to illustrate something that’s happening constantly. Every image you see on a screen contains bright bits and darker bits, and while a traditionally backlit TV has to compromise one to improve the other, an OLED can treat each independently without compromise.

In Marco Polo, for example (yes, we know it’s rubbish), there are loads of scenes with lanterns and fires lighting otherwise dark rooms, and on the C7 these are fabulously dynamic and dramatic. There’s actually been a 25% increase in brightness over last year’s OLEDs and, while an LCD still has an advantage when it comes to peak brightness, the combination of bright and dark elements (the contrast) is much more impressive here. 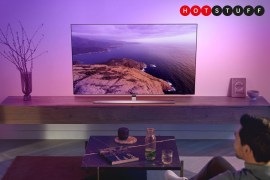