RepliCade cabs make even Quarter Arcades seem hefty: this one seems to have gone through the wash at far too high a temperature and come out at a cutesy 1:6 scale.

There’s still space for a 3.5in display – comparable to what you got on the Nintendo DS. And you’ll find a smallish joystick plus six tappable buttons.

Fine, but Street Fighter II is a famous two-player game… so if this cab wanted to be faithful to the original, surely it’d have two sets of controls? Well, it sort of does. Taking a sneaky sidestep from full accuracy, the unit has a plastic door on its rear. Open it up and you’ll find a compartment housing a fight-stick that you can connect via USB.

Is it any good?

The first RepliCade, pioneering shooter Centipede, looked magnificent, but your bullets disappeared into the tiny screen and the controls were fiddly. So miniaturising a more complex game looked like a bad idea… but we were soon converted.

Even experts may find it hard to pull off every combo, but we found the joystick and buttons sufficient for giving the classic roster of fighters a kicking – until the game decided to punch us solidly in the face.

The two-player option can’t help but coming across as a gimmick – crowding around a 3.5in display feels ridiculous. Yet viewing angles are great and the speaker has real oomph. And, arguably, of all the miniature cabs currently on the market, this is the best for being shown off on a shelf – its petite form won’t take over the house.

Assault and battery: The RepliCade should give you up to two hours of thuggery before it needs a microUSB top-up.

School of even harder knocks: Prod the player-two coin button to access game difficulty settings – and the tougher Turbo edition.

A bit wee for long-term play

The latest Replicade is a tiny Street Fighter II cab, with a bonus mini fight stick

Reckon you can’t get SF II in pint-sized form? Shoryuken! 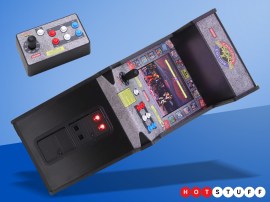 If you were a kid with a console in the ’90s, chances are you were bashing buttons on Street Fighter II 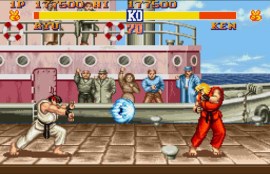