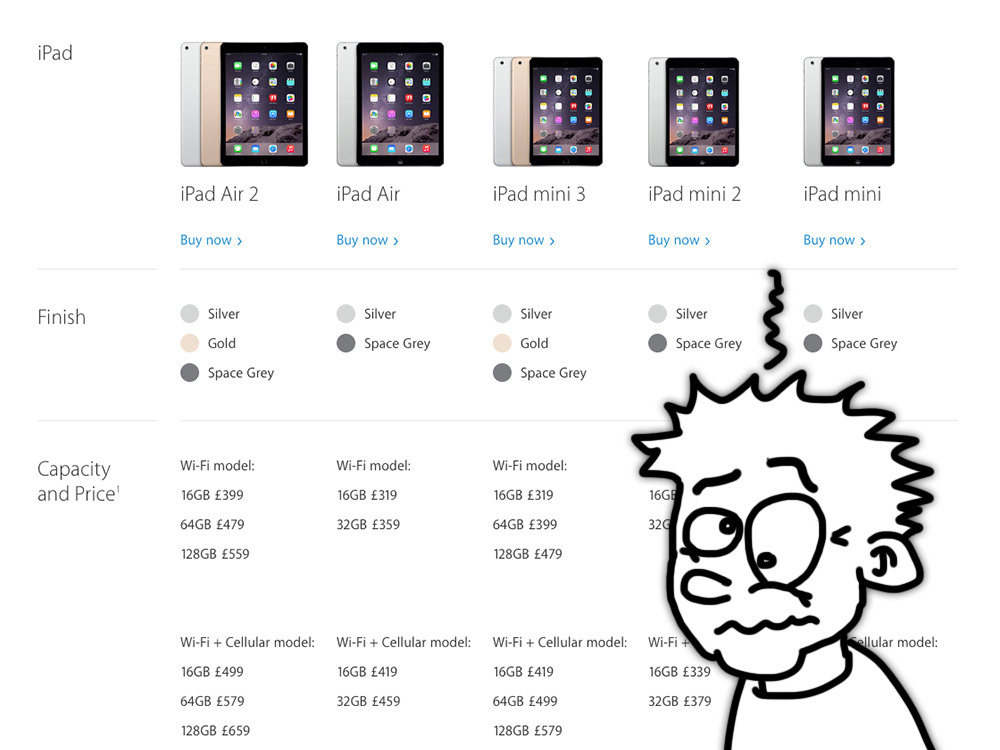 These days, pundits still bang on about Apple somehow being doomed, despite it making billions of dollars in profit every quarter, and churning out iPhones and iPads as fast as the company can sell them. However, while this is often because it makes for a clickbait headline, many within the industry remember a time when Apple really was doomed.

Before Steve Jobs returned to the company, Apple was haemorrhaging money. It had a bloated product line and was obsessed with doing too much by itself — proprietary everything — and yet paid little attention to the buying user experience. If you were one of the rapidly diminishing number of people who actually wanted to buy a new Mac instead of a Windows PC, you were faced with a wall of Performas and Power Macintoshes — a bafflingly complex matrix of products with so much overlap that the best way to select your next machine was probably to pin Apple’s product chart on a wall and lob a dart at it.

Jobs ‘thought different’. He took a knife to Apple’s products and didn’t so much trim the fat as hack off hunks of meat until all that remained was the simplest and most streamlined product matrix you’d ever seen. The idea was Apple would have only one ‘consumer’ and one ‘professional’ product within ‘desktop’ and ‘notebook’ slots, which became the iMac, Power Mac, iBook and PowerBook.

Over time, Apple as a company evolved further, embracing additional key aspects of personal computing that grabbed the imagination of the consumer, but it never lost its sense of focus. As Jobs stated during a Macworld event, “focus is about saying no,” even if that “pisses off people”. Hence, Apple continued to release what it thought its consumers needed rather than what they thought they wanted, restricting choice and providing only the best options.

This notion continued as Apple shifted its own focus towards appliance computing: the iPhone and the iPad. But even as Apple’s product line diversified, its products could still all fit on a desk. Naturally, pundits rallied against this line of thinking, arguing Apple was denying consumers ‘choice’, compared to the plentiful ranges provided by rivals, but Apple was really making things easy. As numerous studies have shown, people really aren’t great at making choices — especially when faced with a huge number of options.

In the context of Apple and choice, the iPad is an interesting case, and recent events highlight how Apple is, for better or worse, now very clearly transforming into a different company from the one Steve Jobs ran. At first, the iPad was just the iPad. You chose an amount of storage, decided whether you wanted 3G, and away you went. Gradually, colour entered the mix, and then the iPad mini. But even last year, the main choice for the consumer was size: did you want the iPad Air or the iPad mini? For the most part, the machines were identical, so the main decision you had to make was relatively simple.

Fast forward to last week’s Apple event. Choice is now abundant in the new iPad line-up, but simplicity has been obliterated. Alongside the iPad Air 2 and iPad mini 3 sit last year’s models, the iPad Air and the iPad mini 2 (previously known as the iPad mini with Retina display); the original iPad mini also lurks in the line-up. So now there are three iPad minis and two iPad Airs; additionally, the Air (2) and mini (3) no longer have parity — they boast different chips and capabilities.