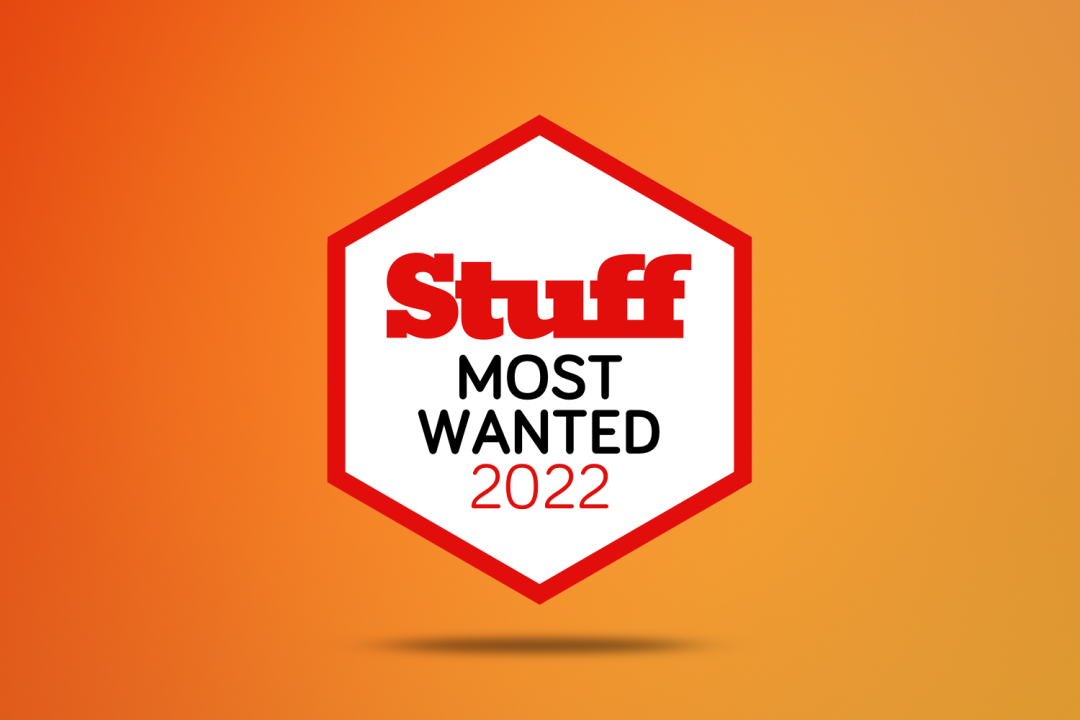 Santa’s barely left the building yet we’re already riding headlong into a new year of brand-spanking gadgets. And while prevailing circumstances meant many of the launch events at the Consumer Electronics Show (CES) in Las Vegas went online instead, the world’s biggest tech show still didn’t disappoint.

From robo-routers to colour-changing cars, massive monitors to, erm, massive TVs, CES 2022 served up a smorgasbord of enticing stuff.

Tricky as it was to pick a top 10 – particularly as we couldn’t walk the halls in person – we’ve whittled down the longlist to bring you our favourite innovations from this year’s CES. Some are cool concepts, others will hit shelves soon – and they all offer a peak into the near future. So without any further faff, here are this year’s Stuff Most Wanted Award winners.

Looking for projected entertainment to enthral on any wall? You could grab a torch and pull out your best shadow puppets. Or for blockbuster beams, switch on the Freestyle. Despite its compact proportions, Samsung’s swivelling projector can cast images measuring up to 100in. The included cradle should make positioning a cinch, with autofocus, auto-keystone and auto-levelling on hand to keep streams sharp and straight. Smart Calibration accounts for coloured backdrops, too. A built-in speaker pumps out soundtracks in 360, while the bulb doubles up as an ambient light. Not near a wall plug? Draw power from a PD battery back or – even niftier – any spare E26 light bulb socket. Take up could be limited by the $899 price tag (UK costs are unconfirmed), but we’re all for avant-garde A/V gadgets.

Wi-Fi routers don’t usually top the bill when it comes to CES shopping lists, but TP-Link’s self-adjusting hub takes the prize in sci-fi style. Equipped with a quartet of antennae, the AXE200 Omni unfurls its signal senders like a dinky drone preparing for liftoff. And the motorised masts do more than intimidate visiting relatives: they rotate automatically based on the location of connected devices. Strolling while you scroll? The antennae should react to your position to optimise signal and connection strength. Thanks to Wi-Fi 6E connectivity, it can also deliver speeds of up to 4.8GBps – although there’s every chance you’ll be too entranced by the robo-beacons to do any browsing. Pricing isn’t confirmed, but TP-Link reckons the Archer AXE200 Omni will ship later this year.

From Galaxy smartphones to big-screen TVs, Samsung seriously showed up at CES this year. But of all the gear revealed by the South Korean maker in Vegas, this curved gaming monitor had us ogling the most. Measuring in at an eye-popping 55in, the Odyssey Ark features a Quantum Dot Mini LED display with a 4K resolution and a 16:9 aspect ratio. Its arced design promises greater gaming immersion, but the slicker trick comes when you rotate it: oriented vertically, the Odyssey Ark’s Multiview feature allows you to display several apps at once. So you can easily live-stream and shoot simultaneously. Or multi-task with Slack and Sheets if Twitch isn’t paying the bills. Pricing’s unconfirmed, but expect it to put a bend in your bank balance.

Styled like the desktop cousin of a Tesla Cybertruck, this angular accessory is a different sort of supercharger; this premium plinth is a top-notch headphone amplifier. Yours for £1999 ($2100), the arresting ACRO CA1000 supports optical, coaxial, USB-C and RCA inputs and it’ll make your songs sound sweeter than ever. What’s more it also has digital audio player smarts with 256GB of onboard storage so it can store your hi-res library alongside a flip-up 4.1in touchscreen. While the device is primarily for desktop use, it does feature an 8400mAh battery for up to 10.5 hours of playback – perfect for parading at audiophile parties.

Samsung’s new QD-OLED tech stole the headlines at CES 2022 – and for good reason. By pairing the deep, immersive blacks of the best OLED panels with the eye-popping brightness of Quantum Dot displays, the clever combo could transform the home cinema viewing experience. First out of the gate with a QD-OLED TV? Not Samsung, but Sony – albeit using a Samsung panel. Follow-up to one of our favourite 4K TVs, Sony’s latest telly looks primed to take the top spot once again. Available in 65in and 55in dimensions, the Master Series A95K features an improved XR processor with fresh depth and colour control tricks. Acoustic Surface Audio+ is back as well, while a new Bravia Cam atop the TV promises to optimise picture and sound based on where you’re sitting. Pricing and release dates are TBC, but it won’t come cheap.

Powerful as the iPad Pro might be, hardcore gamers will still scoff at the idea of playing on a tablet. That could all change with the Asus ROG Flow Z13: essentially a Windows gaming laptop squeezed into a streamlined slate, it’s compatible with XG Mobile – which means players can connect to an external graphics card for a serious performance boost. At 12mm slim and 1.1kg light, the Flow Z13 is properly portable, with an integrated kickstand and detachable keyboard providing useful flexibility. Available in a range of configurations, go-anywhere gamers can spec the 13.4in panel with a 4K resolution, or drop to 1080p for 120Hz refresh rates. Asus hasn’t announced pricing, but the Flow Z13 is expected to arrive in the first half of 2022.

A Bluetooth speaker with infinite battery life might sound like the kind of fanciful CES fodder that will never actually make it to market, but the key tech behind this solar-powered soundbox is already in action. The prototype speaker uses the same Powerfoyle material created by Exeger and applied to the headband of the Urbanista Los Angeles headphones, which allows them to charge using the power of light alone. The main stumbling block here is how to kick out party-starting beats without sapping the cell too heavily. That’s where Heartmotion comes in: a compact and efficient dual-membrane driver developed by transducer startup Mayht. The integration may still be in the works, but it could well be coming to a park near you some time soon.

CES has always been a happy hunting ground for laptop shoppers – and 2022 is no different. Among the most enticing of the new machines is Dell’s XPS 13 Plus. A streamlined upgrade to the existing XPS 13, the premium Plus maxes out on minimalism. Above the keyboard lives a touch-sensitive shortcut bar that’s big on MacBook vibes, while below it you’ll find no evidence of a touchpad. Not a marketing move to up-sell more mice, the interface is in fact a glass setup that’s seamlessly integrated into the bezel, with clicks mimicked by haptic feedback. Barely-there borders around the display add to the pared-back impression, with an OLED display option on offer for vibrant visuals. Time will tell whether its clicker catches on, but the XPS 13 Plus has got the looks (and the hidden touch). Available everywhere this spring, pricing for the Windows 11 machine is not yet confirmed.

The quest for accessible VR continues at this year’s CES – and apparently Panasonic believes that steampunk styling is the way to tempt the masses into donning their featherweight virtual reality glasses. Styled like something Money Heist’s Professor would wear in the Metaverse, the compact goggles weigh just 250g, yet MicroOLED displays inside can deliver 5.2K 10-bit HDR video at refresh rates of up to 120Hz. That’s a super sharp 2.5K pixel resolution per eye. Although they’re much more portable than the Renault family wagon which shares their name, the MeganeX will need to be tethered to a suitably powerful PC to run SteamVR games. Shiftall, the Panasonic division that’s developing the specs, says they’ll sell for “less than $900” when they hit shelves in spring.

Motor getting noticed for the wrong reasons? A quick trip to 8ball’s garage should take the heat off. Alas, switching the lick of your whip isn’t as easy in real life as GTA would have you believe. Or is it? Turning heads in the CES parking lot, BMW demoed a special edition of its electric SUV. Coated with millions of microcapsules, each one contained e-ink – the same stuff used by e-readers to render text. The charged pigments respond when current is applied, meaning the iX Flow can instantly change its shade from light to dark. It’s only a concept at this stage, with colours limited to black and white. But that doesn’t mean we don’t want to cruise around in the colour-changing wagon right now.

While the successor to Sony’s original PS VR has been a long time coming, it didn’t arrive at CES 2022. But Sony did reveal a lot more about the new device. For starters, we now know its name: PlayStation VR2. We also know that it’ll support 4K HDR, with a crisp 2000×2040 pixel resolution per eye. As expected, PS VR2 will work with the Sense controllers revealed last year, tracking the peripherals using integrated cameras – no external sensor necessary. Inside the headset itself, two IR cameras will provide eye-tracking smarts for enhanced interactivity. Sony further revealed that the first game in development for PS VR2 is an immersive new Horizon title: Call of the Mountain. With a summer launch likely, this headset’s got us hooked.