Who says iteration is boring? Not anyone who’s clapped eyes on Apple’s new 16in MacBook Pro (from £2399). It makes a raft of changes that don’t scream ‘radical’, and yet they combine to pack a hefty punch. First up, the new Magic Keyboard, which reportedly has a more satisfying key feel (and, we hope, more longevity). It’s still got a Touch Bar, but there’s a physical Escape key (hurrah!) and the arrow keys revert to an inverted T shape (HURRAH!), so you won’t accidentally prod the wrong ones. Oh, and there’s that other stuff too – the ludicrously bright, colour-accurate Retina display that now sports a 3072×1920 226ppi resolution; improved thermal design; processors with up to twice the performance of their predecessors; up to 64GB of RAM and 8TB of storage; next-gen graphics; and a redesigned six-speaker, high-fidelity sound system. It’s not just that last feature that sounds good with this one. 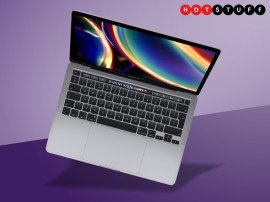