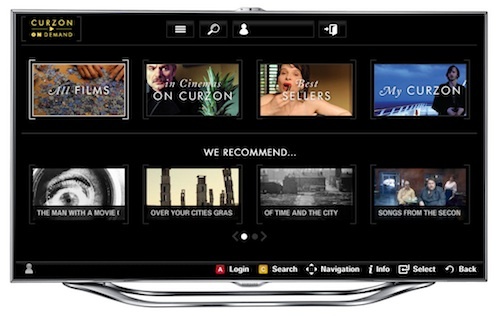 London based arthouse cinema chain Curzon has been letting you stream independent and world cinema to your laptop, PC and mobiles since the end of 2010. But the film buffs have given it a reboot with new plans for simultaneous releases in cinemas and ‘On Curzon’ plus a Samsung Smart TV app that goes live at the end of April.

If you don’t live near a Curzon cinema (in places like Soho and Mayfair), you can now sign up for free to view Curzon on Demand. The service lets you stream up to 300 carefully selected movies to your Samsung Smart TV and watch some new releases on the day they’re released in Curzon cinemas – one of the first is Le Havre, released on April 6th. Films are available for seven days, across all compatible devices and there’s no limit on viewings.

Three hundred films isn’t all that much compared to the might of the Lovefilm and Netflix catalogues but Curzon doesn’t charge a subs fee (it’s pay per view) and you can get library films for £2 plus recent releases for £4. Even the introductory price of £6 Curzon is charging for new releases doesn’t look so steep when compared to the £12+ you’d pay in a plush Curzon cinema.

The Curzon app for Samsung Smart TV looked very slick in our hands-on with the beta version – it recognizes your Curzon membership discounts and lets you search by genre, country or director. Plus Capablue, who built the app, say they hope to add voice and gesture control support in upcoming versions for anyone with a 2012 Samsung TV, like the ES8000.

Curzon on Demand is also available on iPhone and iPad from today – although we haven’t seen it show up on the App Store yet. Not got a Samsung TV? Don’t fret, Curzon aims to get its On Demand service onto fifteen different platforms, most by the end of 2012 – including Sky, Virgin Media’s TiVO, Apple TV, LG TVs and Xbox LIVE.

Just Because They Could – iPhone PRO