If Raspberry Pi has taught us anything it’s that building your own computer from the motherboard up isn’t just for pros. Intel has taken note and will soon be releasing its own version, the Next Unit of Computing with specs to make Raspberry Pi hot under the chipset with fear.

Ready for a stat burst? The NUC will come with a 1.8GHz dual-core Ivy Bridge i3 processor, Intel 4000 graphics, up to 8GB DDR3 RAM, full size or mSATA storage and – unlike Raspberry Pi – it all arrives in an attractive 4x4x2in Intel chassis. Plus there’s up to two HDMI outs, three USB 2.0 ports, Thunderbolt, and Gigabit Ethernet. If that didn’t scramble your brain then you’re probably qualified enough to buy and build one.

But with a price from US$300 (£188) it’s no wonder this makes the Raspberry Pi look like child’s play. Will you be getting fidgety with hardware when Intel releases the NUC on Amazon in early December? Or will you be holding out for the 16-core Parallella supercomputer instead?

We pulled up a couch and put Virgin’s new TV app through its paces – but did it beat Sky Go? 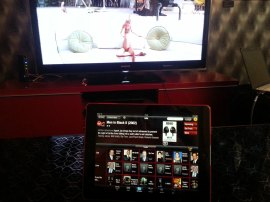