Goldfish aren’t exactly the most exciting pets. Sure, they bob up and down, glub out a few bubbles and unceremoniously headbutt the glass confines of their tanks every now and then, but they’re certainly no direwolves.

The traditional goldfish has however been given a new lease of life, thanks to the Interactive Fish Tank installation by Manuela Donoso and Crys Moore from NYU.

The project transforms the surface of a bed of water into an interactive touchscreen. Orange dots (representing goldfish) are projected into the water via an upwards-facing projector from below.

A customised Arduino board and capacitive sensors detect when your fingers are in the water, turning the surface into the wettest touchscreen you’ll ever use.

Touching the water produces blue circles of ‘food’, causing the orange fish to converse and munch away to their heart’s content. You can even peacefully carve through the water with your hand, watching the fish follow it as you do so.

It’s just the sort of thing we’d want as the centrepiece of our geek zen garden, a place where we go to relax, recoup and meditate, hoping to reach the seventh level of tech nirvana – where every gadget is built to your exact requests, and made out of regenerating chocolate. Also, cats. Cats everywhere.

[Cargo Collective via The Verge] 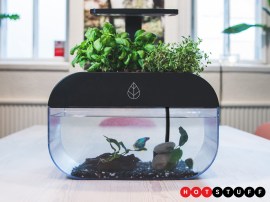