The Nokia C5 got its official outing at the beginning of the month, but now we’ve spied leaked shots of its full QWERTY sibling, the C6.

Looking a little like a QWERTY-packing 5800, the C6 has dropped the tilting display seen in the rather disappointing N97, which is a bit of a shame – it’s probably one of the things we liked best about the handset.

If Nokia’s new naming system is anything to go by, this means the C6 will be one of Nokia’s core, entry-level handsets that will come a bit higher specced than the C5.

That said, we don’t really know much about specs other than we can expect a touchscreen, 3G connectivity and apparently just 256MB of internal storage, with a microSD card provided for the rest.

The leak suggests we can expect to see the C6 in Europe from summer 2010, but we’ll keep you updated with any official noise from Nokia’s camp as soon as we get it.

How to pick a Pixel 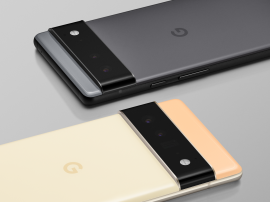