Darwin’s work would have been much simpler if he’d had a powerful tablet computer to reference his sketches of barnacle life on, or pass those long journies on the Beagle playing Meow Meow Happy Fight.

Sadly, Sharp’s only just got around to launching its new Galapagos tablets in Japan, a bit late to be of any use to the evolutionary theorist.

The pair of tablets has evolved into two distinct sizes – one’s a 5.5in maxiphone similar to Dell’s Streak, the other’s a 10.8in tablet proper.

The smaller one has a smartphone-like control face with a trackball, while the larger one keeps things simple with a pair of buttons going home or back. Both have bookstores that show a definite biological link to iBooks (though for the moment with Japanese titles) and they’ll be launching in Japan this December.

It looks like a homegrown, Linux-based OS, which is bad news for app addicts, but we’ll be keeping our eyes peeled for an Android-based, Europe-bound version in the new year. Prehensile limbs crossed, eh? 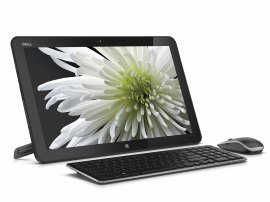 Sharp steps into tablet territory with the Galapagos E-Media Tablet

Sharp is the latest manufacturer to jump on the tablet bandwagon 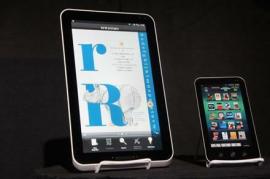