Sony has released the new version of its Bloggie pocket camcorder. What set the original apart from the crowd was its swivel-mount lens and 360 degree converter. The new Bloggie Touch MHS-TS20K keeps the 360 degree lens converter, loses the swivel lens and adds a full touchscreen– doing away with buttons almost completely.

The bigger 3in touchscreen takes care of most of the controls, except for a big red record button just below to start and stop proceedings.

There’s 8GB of internal storage, so there’s plenty of space for your vids but if you’re a hoarder, there’s unfortunately no slot for expanding on that. Somewhat surprisingly, it also does 12.8MP snaps – we’re used to getting just 5MP out of most camcorders.

Sharing software is preloaded, so there are no CDs required and the a flip-out USB arm takes care of uploading duties.

A new macro mode for shooting objects as close as 10cm is also on-hand – a boon for detail fans, or as Sony suggests “it’s ideal for snapping the menu of that unforgettable restaurant meal”. Another one for the album…

The Sony Bloggie Touch will be available from November for around £200 in silver, pink or black.

CES 2010: Camcorders get touch screens, toughen up, slim down and start streaming

Sony has released its pocket camcorder called the Bloggie, which is a progression from the Webbie released last year in the States. Its most notable f 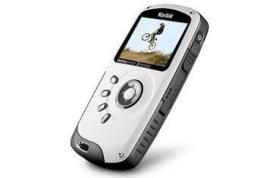 Following in the footsteps of the likes of the Flip family and the Kodak Zi8, Sony has outed its addition to the ultra-portable camcorder movement wit