Roughly translated into English, that perplexing alpha-numeric sequence can be read as “an update of a classy camcorder with a 3D attachment bolted on”. Available as a package, the TM900 camcorder and VW-CLT1 3D adaptor hints at semi-pro, 3D hi-def video for a high-end consumer price tag.

It’s certainly built on solid foundations, with the main camcorder unit an evolution of the TM700 series. The TM900 adds new hybrid image stabilisation, better audio recording and a bigger touch sensitive display to one of the most powerful and user-friendly HD camcorders currently available.

Intelligent design choices such as the iAuto button (which makes sensible default choices for everything based on the current conditions) mean that even a clumsy bungler can manage to shoot acceptable hi-def video under trying circumstances, while the accessible and intuitive menu system keeps the many custom controls no more than a few seconds away. On top of that, the VW-CLT1  opens up a world of 3D-shooting possibilities.

Wrestling the 3D attachment onto the camera isn’t a great experience. The locator clips slip in easily enough, but there will be a few tense minutes as you try to catch the threads on the adaptor rig without doing serious damage to either bit of kit.

The journey to 3D isn’t over yet either. The camera notices you’ve been up to something, so immediately you switch it on, it demands you properly align the 3D lens. There’s a series of three dials to be twiddled under the flap, but it isn’t too tricky once you get the hang of it.

In 3D shooting mode, you’ll notice the LCD panel remains flat as a pancake – you’ll have to wait until you upload it to a suitable 3D display before you can see how well it’s working. It is understandable that Panasonic have foregone the extra expense of fitting out the display with 3D trickery, but somewhat limiting to the user, who rather like the days of film cameras, isn’t quite sure what they’ve got until they get back to base.

Shooting in 3D mode is simple enough. In fact, it’s a bit simpler because suddenly a lot of the options and features of the camera are no longer available. Because of the way the beamsplitter attachment works (see the Instant Expert section for more on that), the power of zoom is lost, as are some other settings.

The consequent reduction in light hitting the sensor also means that shooting indoors is likely to be off the menu too, unless you’re in a studio or you happen to light your home like it was a storefront on Oxford Street. It can be done, but grainy images result which are poor source material for your 3D epic.

Incredibly, it’s impossible to take a 3D still image with this device, in spite of the fact that when it’s recording video it’s taking upwards of 25 of the blighters every second. Even a reduced-size image would have lifted our spirits a little.

The real killer though is the limited amount of image separation. Ideally the two 3D lenses would be around 6-7cm apart, but with about 2cm between them, the beamsplitter is too small to bring out the 3D depth of anything more than a few metres away.

It works well for close-ups, but unless you’re creating macro movies in the studio, the 3D mode is a bit of a washout. The camera itself is sound, and does offer some feature improvements over the already impressive Panasonic range, but if you have a real need for hi-def, multi-dimensional media, it may be worth holding out to see how the forthcoming JVC TS-TD1  and Sony HDR-TD10 stack up.

The best phablets in the world 2016 – reviewed

Prepare your puny pockets: the world’s greatest bigphones are here to stretch your trousers 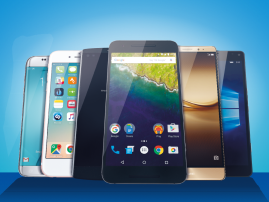