Home / Features / Google Pixel 3a vs Motorola Moto G7 Plus: Which is best? 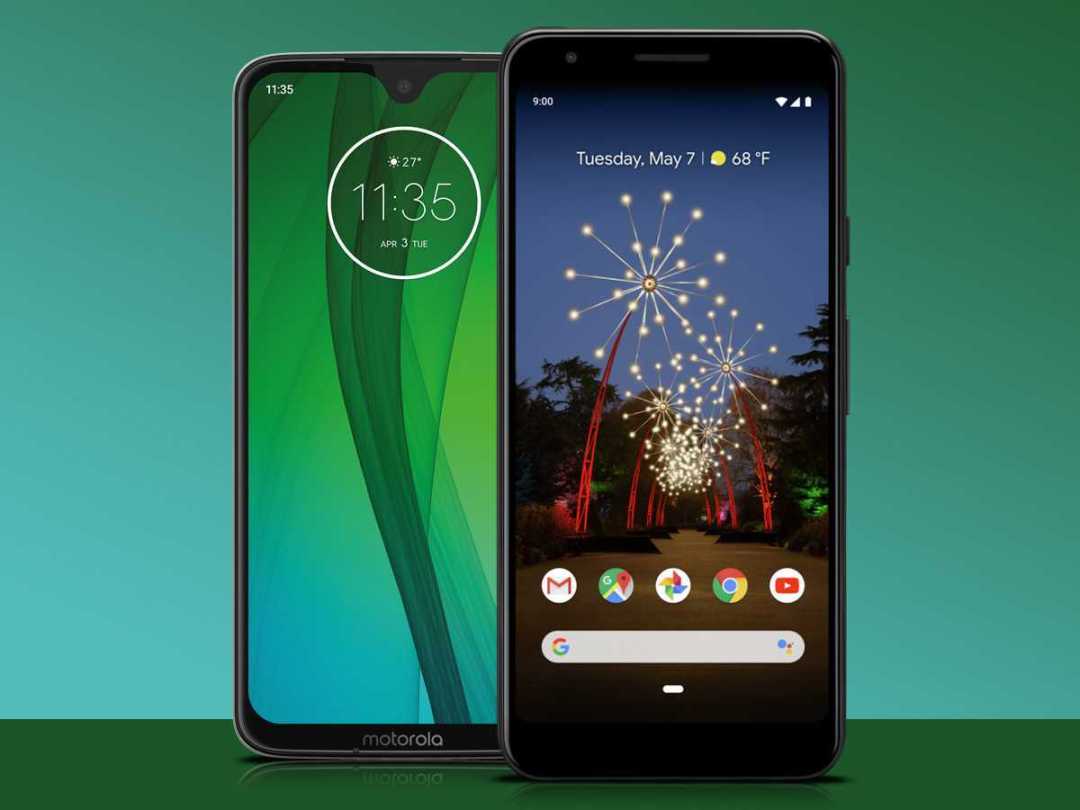 The Pixel 3a is Google’s cheapest Pixel to date, delivering a mid-range revision on the Pixel 3 that costs almost half the price without shedding all of its best features.

Even so, it’s launching into a smartphone market that is increasingly focused on brilliant, budget-friendly devices, packing just enough flagship allure into £200-300 phones to make you reconsider a much higher spend. Motorola’s latest Moto G7 Plus is the best of the bunch right now, with a teardrop notch, a pretty good camera, and enough power and polish to feel like a steal at £269.

Is it worth spending a bit more for the £399 Pixel 3a? Here’s what we think, now that we’ve reviewed Google’s new mid-ranger.

The Pixel 3a keeps all of the visual allure of the standard Pixel 3 intact – but it swaps the glass and aluminium out for polycarbonate plastic. It doesn’t feel too cheap, but it’s still plastic all the same. Even so, we still like the two-tone backing effect. The bigger issue comes with the enormous bezel above and below the screen. Google still hasn’t matched its rivals on smartphone design.

You’re right to not expect much from a cheaper phone, but the Moto G7 Plus actually looks pretty nice. With a teardrop notch and a modest "chin" of bezel, it doesn’t waste as much space on the front as the Pixel 3a. The curved glass backing isn’t as distinctive as the Pixel, but it is glass, giving the cheaper phone a slightly more premium allure.

Screen: Both are strong

Bezels aside, when it comes to the actual screen itself, both are quite good here. The Moto G7 Plus opts for a large 6.2in 1080p panel with the teardrop notch, and it’s an LCD screen that delivers solid black levels and good contrast.

The Pixel 3a goes a bit smaller at 5.6in and keeps the 1080p count, and there’s no notch or cutout obscuring the screen. Better yet, it’s an OLED panel, making for even more vibrant colours and inky blacks. It gets the nod here, but it’s no blowout.

The Moto G7 Plus packs twice the back cameras of the Pixel 3a, but Google has a secret weapon back there: a proper flagship camera. The 12.2-megapixel f/1.8 single-shooter is the same back camera as the full-blooded Pixel 3, albeit without the benefit of the Pixel Visual Core image signal processor that’s missing from the cheaper version of the handset.

Ultimately, we didn’t notice much of a difference. The Pixel 3a delivers rich, detail-packed shots just like the proper Pixel 3, plus it can do amazing low-light shots via the Night Sight mode.

The Moto G7 Plus has a pair of cameras on the back, with a 16MP f/1.7 main sensor and a 5MP depth lens alongside. You’ll get good detail and effective shadow detail in the HDR mode, and it’s faster to focus than the previous-gen Moto. It’s one of the best camera setups for the price, but for a bit more cash, you definitely get better everyday snaps with the Pixel 3a.

More money yields more power here – that’s no big surprise. The Pixel 3a uses the mid-range Qualcomm Snapdragon 670 chip with 4GB RAM alongside, which provides a snappy Android 9 Pie experience. You’ll see a slight dip from the standard Pixel 3 when it comes to gaming, as Asphalt 9 is a little choppier, but PUBG Mobile still stays pretty smooth at high graphics settings.

The Moto G7 Plus is a little bit weaker with the Snapdragon 632 and 4GB RAM, which is likewise pretty smooth with Motorola’s skinned take on Android 9 Pie but was a bit sluggish in PUBG Mobile even on lower graphics settings. Load times are a little slower with media, too, but overall it gets the job done well enough. Hey, it’s a £269 phone.

Battery and perks: One key difference

You’ll find a 3,000mAh battery pack in both of these phones, which gives each a solid day of uptime with average use. Neither has wireless charging, but both top up quickly with a cord thanks to fast-charging capabilities.

Both also come with 64GB of internal storage, but you might be surprised to find that it’s the cheaper phone that has a huge perk: microSD card support for expandable storage. You can add up to 512GB more as you please, while the Pixel 3a has nothing of the sort. That’s a standard Pixel annoyance, but it’s made all the more glaring in this comparison.

It’s really no surprise that the more expensive phone has some higher-end components, whether it’s the OLED panel, more capable camera, or faster processor. But the Motorola Moto G7 Plus has the more alluring design and a big perk in the form of microSD support, plus the screen and camera are quite good for the price.

The camera alone might sell some folks on the Google Pixel 3a, and we say more power to ’em. But if you want an excellent all-around phone that won’t break the bank, we have to give our recommendation to the Moto G7 Plus. It’s £130 less without feeling cheap or hobbled, and you’ll struggle to find a better deal on a smartphone today.